Coping with a Friend’s Death: How Scott Dinsmore Changed Me 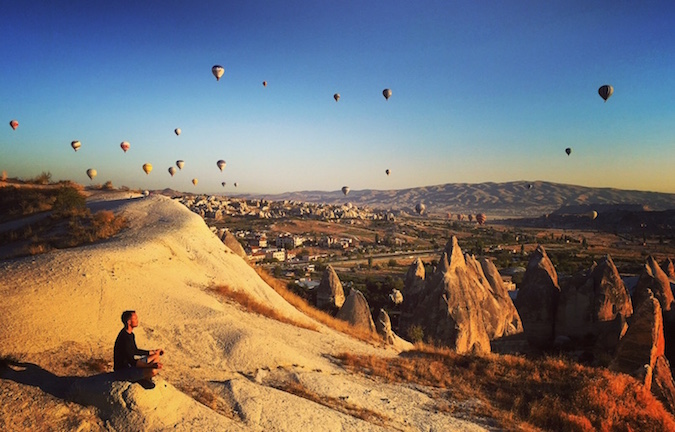 I can’t remember exactly when I met Scott Dinsmore. But, like so many modern friendships, I know where: the Internet.

Scott ran Live Your Legend, a website about finding your passion and doing the work that you love. Scott wanted people to do whatever it was that lit a fire in their belly. Over the years, we became friends and bonded over our shared love of travel, entrepreneurship, helping others, running an online business, and Taylor Swift.

Eight months ago, Scott and his wife Chelsea sold everything, slung backpacks over their shoulders, and set off to travel the world. They traveled around Europe, explored South America, and were just starting to explore Africa.

Waking up to the news was like a punch in the gut. I couldn’t believe it. What do you mean he died? No way. Thirty-three-year olds don’t die. It just doesn’t seem possible. Especially Scott, who was this athletic superhero of a man!

I read and read the email letting me know. I called my friends. I cried. I called my parents. I kept thinking it was going to be like the movies — the doctors would be wrong, he’d jolt back to life, and we’d all say, “You had us worried so much!”

But life isn’t like the movies and the news was true.

Scott isn’t coming back, and the world has lost an uplifting and empowering voice. He was one of the most outgoing, happy, helpful, and amazing guys I knew.

There’s not been a day since that I haven’t tried to make sense of this situation. I’ve never lost someone so close to me and it seems so weird and surreal that I won’t ever see or talk to him again.

Scott was always happy, talkative, and energetic. If you asked him how he was doing, he would almost always say a 9 or 10. He had the unique ability to make people feel energized about even the most mundane things. Even though he didn’t watch sports, he was the type of person who would get dressed up and become a super fan just for you!

The last time I saw him, we ate breakfast in San Francisco. He was leaving that morning to drive out of the city and, though he had a lot to do, he made time to eat with me.

That defined Scott for me — he always put others in front of himself.

His death has thrown me for a loop. In Scott’s last blog, he talked about his struggle to balance work with his desire to get off the grid.

I almost decided not to book this Tanzania trip because I didn’t think I could (or should) step away. How ridiculous is that? To pass up an adventure I’ve talked about for years — because I’d convinced myself I couldn’t disconnect. Or more truthfully, because I couldn’t find the courage to do it.

For the last few months, I’ve felt uneasy about the direction of my life. I’m not unhappy, but I feel like a ship tossed around by gigantic waves. I have no direction. No course to follow. The last few years have been a battle of disparate goals. I keep trying to live too many lives: traveler, business owner, New Yorker, Austinite.

It’s not working. I can’t juggle it all.

Being so focused on the behind the scenes of this website while trying to juggle so much has burned me out. I work every day (and, to be fair, I love what I do), but the human brain needs a break. It needs to recharge. I can’t tell you the last time my travels weren’t bookended by conferences, speaking engagements, or meetings.

And, like Scott, I worry that disconnecting will cause people to turn away and think I’ve abandoned this website. I’ve let this website become the only thing in my life. I can’t step back – what if something happens? What if someone needs me?

I’ve felt very lost this year and miss the old kind of travel I did, where I could go slow, relax, and move when I wanted. I can’t remember the last time I just roamed without a time limit. Heck, I’ve barely put a dent in my list of things to do before I’m 35 since I wrote it two years ago.

Scott’s death put a lot in perspective. If I don’t make a change now, when will I? It’s never going to be the perfect moment. Something will always come up and get in the way.

And I should do the same. The world will not end if I don’t send a tweet or update my Facebook page.

If Scott were here, he’d tell me to stop delaying and take action.

So I’ve decided it’s time to pack my backpack, bid my friends goodbye, and take the trips I’ve been putting off. I want to travel like I used to — with nothing but the road in front of me. No plans, no flights home, no time limit.

On November 3rd, I fly to Hong Kong before heading to Bangkok.

From there, I plan to head into northern Thailand and Laos before flying to the Philippines for New Year’s.

Well, maybe. I’m not sure. I have two months before I need to be back in NYC (there are just some personal matters I can’t avoid).

After that, it’s down to South America for four months. I’ll fly into Argentina and travel as far north as I can get. I have until May, when I need to return home for a friend’s wedding.

It’s time I stop pretending that I can be both a nomad and someone who’s settled down. I either live somewhere or I don’t. The two years I’ve spent trying to juggle both hasn’t worked and it’s time to admit the truth: I’m not ready to settle down. The road is where I belong.

I will miss Scott — his attitude, intelligence, personality, and friendship. He was an amazing soul, and his death convinces me that our time on this planet is too short and never secure.

Last week, I flew out to San Francisco for his service. One of the things often discussed was how to carry on Scott’s legacy. His wife Chelsea gave a beautiful speech about how, though Scott may be gone, his legacy and work will carry on in each of us and that the best way to honor his life would be to continue to live our legends, the way Scott would have done.

Wherever Scott is, he’s living his dreams, and I know he would push me to live mine, telling me that tomorrow is no time to start something I can do today.

Scott ended his last blog post with the video “Look Up” about how we should get off our phones and embrace the world around us. I want to end this post with two videos.

First, Scott’s TED talk about creating a life you love. Let it inspire you the way it’s inspired over 2 million viewers:

Second, the song My Wish by Rascal Flatts. It was played at Scott’s service and was one of his favorites:

Scott, we miss you every day. See you on the other side.