Rediscovering the Lost Art of Travel 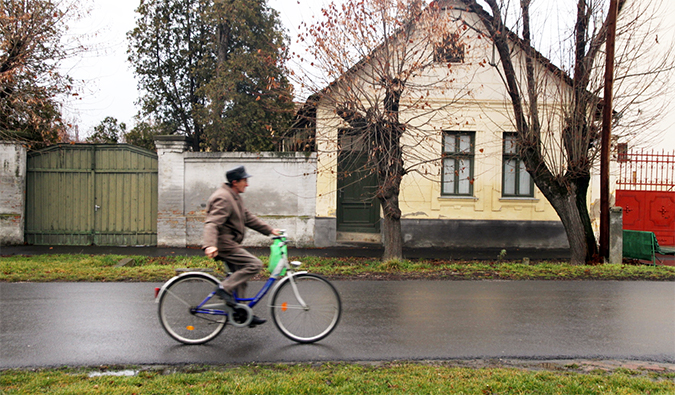 Seth Kugel is the former Frugal Traveler columnist for the New York Times and author of the new Rediscovering Travel: A Guide for the Globally Curious, from which this is adapted. I’ve known him for years and our travel philosophy dovetails a lot. I read his book last year and thought “If I were ever to write a book on the state of the travel industry, this is the book I would write!” It’s a great book and today, Seth excerpted part of the book for us!

Stenciled in white block letters on a dreary cement wall in Mezöberény, a tidy but fraying town of twelve thousand in the hyperbolically named Great Hungarian Plain, appeared the word:

Hours earlier, in the overcast predawn hours of a nippy January day, I had stumbled off the Bucharest-to-Budapest train to see what it would be like to spend the weekend in the opposite of a tourist destination. Mezöberény was not just absent from guidebooks — it did not have a single restaurant, hotel, or activity listed on TripAdvisor, something that cannot be said for Mbabara, Uganda, or Dalanzadgad, Mongolia. I did have some info on the town, though, thanks to its municipal website: resident József Halász had recently celebrated his ninetieth birthday.

Or that’s what Google Translate told me. Hungarian is a Uralic language, more closely related to the output you might get falling asleep on a keyboard than to English or German or French. That makes even basic comprehension a challenge, as I found as soon as I rushed from the train to the station’s restrooms and faced the urgent need to choose between two doors: FÉRFI and NÖI. The authorities had apparently saved a few forints by not splurging on stick-figure signs.

The day had been born cold and gray and stayed that way as I walked through the town, slowly getting my bearings, intrigued by the pre-war, pre-Communist homes and the more than occasional bike rider — there were almost more bikes than cars — who waved hello. But then a winter drizzle took up, causing an abrupt decline in the number of cyclists even as the number of wandering American visitors held steady at one. To me, a travel day that turns rainy is like a piece of chocolate I’ve dropped on the floor: it’s significantly less appealing, but I’ll be damned if I’m going to throw it away.

It was in the first minutes of rain that I came across that stenciled sign on an otherwise residential street. Beyond the wall, down a cracking, now puddle-pocked driveway, were a dozen or so plastic barrels lined up like nuclear-waste drums. Beyond them, maybe a hundred feet from where I stood, was a one-story L-shaped building. What was this place? Well, SZESZFÖZDE, apparently. But what was that?

In the old days (say, 2009), I would have pulled out an English-Hungarian phrasebook or pocket dictionary, but instead, I activated international roaming on my phone, carefully spelled out S-Z-E-S- Z-F-O-Z-D-E, and tapped Go. 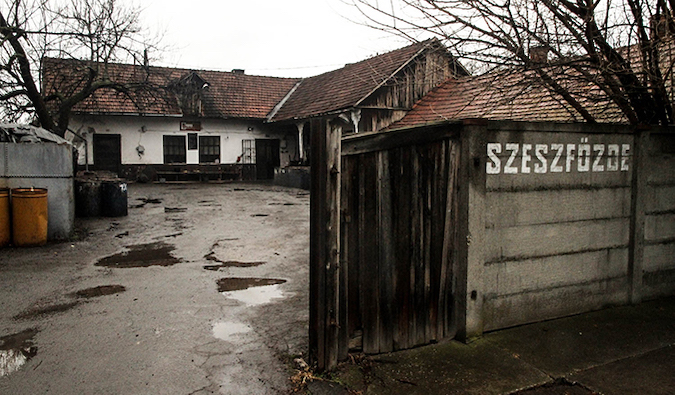 The less-than-lightning speed of Great Hungarian Plain mobile service provided a dramatic pause. And then came my answer:

I would have guessed PRIVATE PROPERTY maybe, or DANGER—STAY OUT, or MIND YOUR OWN BUSINESS, YOU MEDDLING FOREIGNER! But a distillery? A wave of adrenaline washed down my torso as my lips curled into a dumb-luck smile.

Two rather gruff-looking men emerged from the door, the older one smoking a cigarette and wearing a sweater and work-stained trousers that suggested Warsaw Pact 1986 more than modern-day European Union. I waved to them, pointed to the bulky Canon 7D hanging from my neck, and then to the building. Old-school Google Translate.

They waved me in and gave me a tour.

Inside the ancient but fully functioning distillery, the men let me take pictures as they gave me a vaguely intelligible lesson via pointing, expressive looks, and smartphone-translated Hungarian, on how pálinka — Hungarian fruit brandy — was made.

Those barrels I had seen outside, it turned out, were full of fermenting pear and grape and apple juices. Inside, it was distilled somehow through a looping and tangled system of pipes running out of tin tanks up and along the walls. It looked like the laboratory of a mad scientist with a penchant for tacky linoleum flooring.

As they led me around, I engaged in that most intrinsic of travel activities: trying to see the world from the vantage point of someone utterly different from me. What was their life like? Had they traveled? Who were their parents and grandparents? The language barrier that did not allow them to answer did not stop me from wondering.

After soaking in every rusty detail and every glint of pride in the men’s tired eyes, I typed, “Come visit me in New York” into Google Translate — laughs all around — then headed back onto the drizzly streets of Mezöberény, utterly elated.

What was so great about this moment? Sure, the szeszfözde was a neat little story for friends, and in my case, worth a few paragraphs in the newspaper. But wasn’t it just a grimy business making local hooch in a town that even most Hungarians would classify as the middle of nowhere? 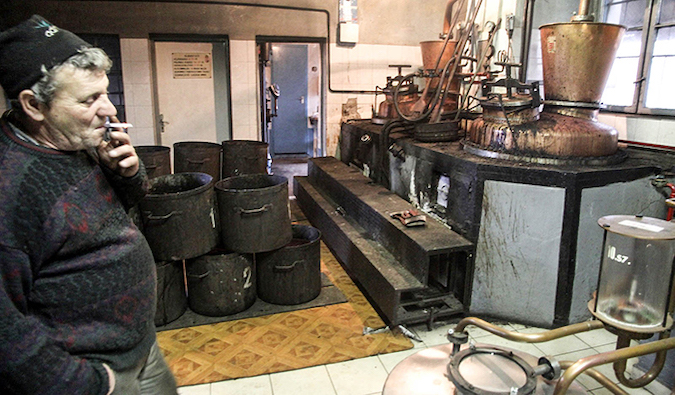 It was a great moment because I discovered it. Not an earth-shattering discovery in the sense of a cure for AIDS or a previously unknown species of poison-spitting neon frog the size of a pinky nail. But it was 100 percent unexpected, 100 percent real, and 100 percent mine.

Discovery used to be the lifeblood of travel, at least for those of us who shun tour-bus groups and all-inclusive resorts. We used to leave home knowing relatively little about our destination — perhaps with some highlighted guidebook pages denoting major attractions and local tipping etiquette, a list of tips culled from well-traveled friends, or articles copied and pasted into a Word document. For the ambitious, maybe a notional feel for the local history or culture gleaned pre-trip from a historical novel.

Beyond that, we were on our own.

Paper guidebooks frozen in time helped us along, as did pamphlets and paper maps from tourist information booths and tips from a hotel concierge. Earlier this century, Google searches in internet cafés also lent a hand. But otherwise, there was no choice: You decided what to do with your own eyes and ears, by wandering, by initiating human-to-human contact. Tips came from hearing fellow travelers’ stories over hostel or (non-Air) B&B breakfasts, entering a shop to ask directions and ending up in a conversation with the owner, or catching a whiff of fresh bread or sizzling chilies and following your nose.

Of course, all that still happens today — but only if you really go out of your way to make it happen. Not only is nearly every place in the world documented to within an inch of its life but that documentation — which comes dressed as both fact and opinion — is overwhelmingly and immediately available, thanks to pervasive technology. That’s great for many things in life — medical information, how-to videos, shorter commutes. But don’t we travel to break our routine? To experience the unexpected? To let the world delight us?

If we do, we have a funny way of showing it. We pore over online reviews for weeks, plan days down to the half-hour, and then let GPS and the collected wisdom of the unwise lead us blindly. We mean well — no one wants to have a romantic dinner go wrong or to get lost and miss out on a “must-see attraction” or to risk chaos by failing to keep the kids entertained for three minutes.

But isn’t that just a digital version of the old-fashioned group tour? Well, almost, except that on the bus tour, you actually get to meet the person whose advice you’re taking.

One of my most ironclad rules of travel is this: the number of visitors a place receives is inversely related to how nice locals are to those visitors. Mezöberény, as far as I knew, had received precisely no foreign tourists ever. It was the anti-Paris, and this distillery the anti-Louvre.

People who inhabit the still-plentiful tourist-free swaths of the planet tend to be not only just nicer but more curious. They say a bear in the wild is just as scared of you as you are of it. I say people in places where outsiders rarely go are just as curious about visitors as visitors are about them. The question is not why the distillery workers invited me — a camera-toting, gibberish-talking stranger — in for a tour, it’s why wouldn’t they? If it were me, I’d be thinking: “What is this odd foreigner doing outside our szeszfözde with a camera? Wait till I tell the kids! And by the way, isn’t it about time we took a break?”

More importantly, is it possible that stumbling upon a dank distillery might be just as thrilling as a tour of one of the world’s great monuments? Did the surge of emotion I felt when the word distillery popped onto my screen match what I felt when I first glanced up at the ceiling of the Sistine Chapel?

Probably not, although I remember the distillery moment quite precisely and barely recall what I felt at the Sistine Chapel. Why? Because although Michelangelo’s prophets and sibyls and biblical re-creations are several trillion times lovelier than rusty pipes in a concrete building reeking of fermented fruit, I had seen them before in photos, heard professors talk about them, and read other travelers’ accounts as I sought the best times to avoid crowds.

That’s why I believe it is time we rediscover travel and recognize the value of what an overdocumented world has taken away: the delight of making things happen on your own. 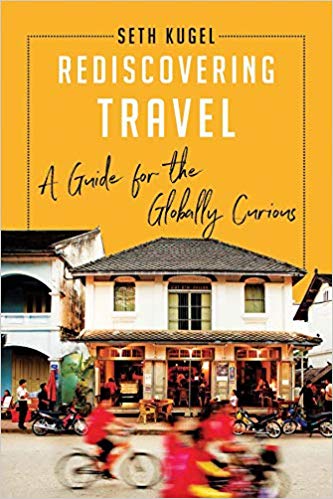 Seth is the former Frugal Traveler columnist for the New York Times and author of the new Rediscovering Travel: A Guide for the Globally Curious, from which this is adapted. In this book, Kugel challenges the modern travel industry with a determination to reignite humanity’s age-old sense of adventure that has virtually been vanquished in this spontaneity-obliterating digital age. You can purchase the book at Amazon and give it a read.