Flying at 35,000 Feet with Heather Poole 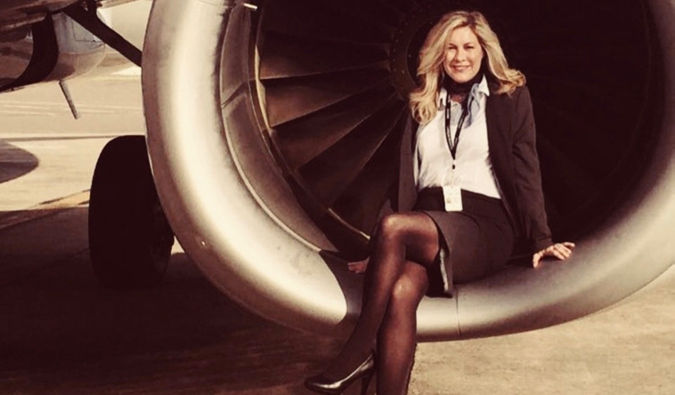 I first met Heather Poole at a travel blog conference. I had been reading her blog for awhile (she writes about life as a flight attendant) and we got along well. Recently, she published a book, Cruising Attitude: Tales of Crashpads, Crew Drama, and Crazy Passengers at 35,000 Feet, about life as a flight attendant. I, ironically, picked it up at an airport and read it on a plane. She found time at 35,000 feet to talk about her job and book.

Nomadic Matt: You’re a flight attendant. What’s that like? a
Heather Poole: Even though the job has changed a lot over the years, it can still be a lot of fun. But patience is a must, more so than ever before. Flight attendants are the face of the airline, and passengers have a tendency to take things out on us, even if what happened is not our fault.

Besides being friendly and outgoing, we also have to be able to adapt to change easily. This is why we always have backup plans A, B, and C, because there’s always something bound to go wrong in the airline industry: mechanicals, delays, cancellations. They happen. Even on Christmas Eve. If there are kids at home, this can be one of the most difficult aspects of the job.

Flight attendants also are very independent. It’s not uncommon to meet a coworker for the first time on a trip and then not see them again for a few months, maybe even years. The best part about the job is when we step off the airplane; we always leave the stress of the flight behind. Every flight is a new flight, which means every day is a new adventure.

How often do flight attendants work? Do they fly a lot of the same routes over and over again?
Our schedules average around 85 hours a month. But don’t let the number fool you. That’s flying time only. Most flight attendants work way more than that. Time on the ground doesn’t count toward our pay and therefore isn’t included in our monthly schedules. This is why we want to spend as much time as possible in the air, not hopping from city to city with lots of time between flights on the ground.

Airline seniority determines the kind of trip a flight attendant can hold. This explains why most international long-haul flights are staffed with senior crews. Once we have enough seniority to hold a good trip, it’s the only trip we’re going to work until we’re senior enough to hold an even better one. Schedules are set up with a day or two off between each trip, but many of us will “trip trade” with other flight attendants to work a few trips in a row in order to maximize our time off on the ground.

Any hint on the airline you work for?
One of the big ones.

What did your coworkers think of you writing this book?
I don’t know that most of them even know I’ve written a book. And if they do know, they probably just assume I’m still writing it. I’ve been talking about writing this book for years!

Did your airline know, and were there any restrictions placed on you?
I didn’t ask for their permission to write the book, and I certainly didn’t call anyone up at headquarters to make an announcement about it either. Flight attendants learn to lay low very early on in their careers. But I’ve been blogging about flying for a long time. I’m fairly certain they know who I am. Just keep in mind my book is not an airline exposé. It’s about what it’s like to be a flight attendant.

It doesn’t really matter who we work for; the job is pretty much the same wherever you go. Plus half of the book takes place on the ground, because it’s not just a job, it’s a lifestyle. That’s what I set out to write about. Plus, there are so many misconceptions about flight attendants I decided to set the record straight.

What is one really juicy story you left out?
One story that got deleted was about a celebrity who claimed to have magical powers after a passenger fell unconscious. To this day, we still don’t know if it was his magical powers or the husband who kept nudging his wife in the arm in an effort to make her come to and see the celebrity he was excitedly talking about that made her gain consciousness again.

With so many changes to the airline industry over the years, would you recommend that someone become a flight attendant?
It’s a great job for someone who hates the idea of working a 9-to-5 job. But it’s not easy in the beginning. Our living conditions are pretty extreme. This is why so many flight attendants either last a lifetime or just a few weeks.

Has the job gotten worse over the last few years because of all the problems in the airline industry?
Of course it’s gotten worse, just like lots of other jobs in America.

Most people don’t know that flight attendants start out making $14,000-18,000 USD the first year. With cutbacks, they’ll be making less! So not only do we make less, we’re working much longer hours followed by shorter layovers. Think 8-10 hours at an airport hotel on domestic routes. Mix in a delay, and there’s barely enough time to eat, sleep, AND shower.

That said, I’m still flying and I don’t feel like quitting — yet. Once I can no longer manipulate my schedule the way I want/need to is the day I might have to say buh-bye. I dread that day.

In the book, you talk about how New York City is your “base,” but I know you don’t live in NYC. How can a flight attendant be based somewhere they don’t live?
Instead of driving to work, we take a plane to work. It’s called commuting, and it’s getting harder and harder to do these days. I once saw two flight attendants come to blows over the one and only jump seat on the last flight out.

Between trips, we stay at a “crash pad.” Instead of paying for a room, we pay for a bed. Sometimes we’ll even share the bed (not at the same time!). Commuters mean business. We’re in and out as quickly as possible. The name of the game is to get as many flying hours in as we can in a short amount of time, so we can fly back home and enjoy a stretch of days off before we have to do it again.

Are a lot of people getting into the profession these days?
In 2010, Delta announced an opening for 1,000 flight attendants. Over 100,000 people applied. These days it’s much harder to find work with an airline now that being a flight attendant is considered a career, not just a job. Turnover isn’t as high as it once was, and competition has gotten fierce.

In your book, you talk a lot about the difficulty in dating as a flight attendant. As someone on the move a lot, I can relate to that. Do lots of flight attendants have problems dating? Do they all end up with pilots?
It’s hard enough dealing with an unusual job without finding a partner who can deal with it. This is why so many relationships end up crashing and burning after someone in the relationship becomes a flight attendant. Because it’s either quit or break up.

Then of course once you find someone, it takes twice as long to realize that person might not be right for you due to the fact that we’re not on the ground as often as regular people. And then there are those who want to date flight attendants just because it’s easier to juggle multiple partners when one of them isn’t home half the time.

As for pilots, we tend to either love them or hate them, maybe a little too much! To be fair I’m pretty sure the same thing can be said for the way they feel about us.

If you could tell people three things on how to behave on a flight, what would they be?
Be nice. Be nice. Be nice. We’re all in the same boat — er, plane — together. Wait until we’re safe and sound on the ground if you must freak out.

Any tips for getting an upgrade from coach?
Do people still think there’s a chance of that happening? Don’t get me wrong, miracles do happen, but not often. Flights are full, and frequent fliers know exactly where their name is on the list these days.

What’s the secret to at least getting an extra meal or free drink?
Very rarely do we have extra meals on board. In first and business class we’re usually catered right on the money.

In coach, we barely have enough to serve half a plane full of passengers who are willing to purchase food. As for free drinks, flight attendants have been known to comp drinks to passengers who help out by doing nice things like switching seats so a family can sit together.

You can find out more about Heather Poole on Twitter or at heatherpoole.com. You can find her book, Cruising Attitude: Tales of Crashpads, Crew Drama, and Crazy Passengers at 35,000 Feet, on Amazon.