The Challenges of Love on the Road 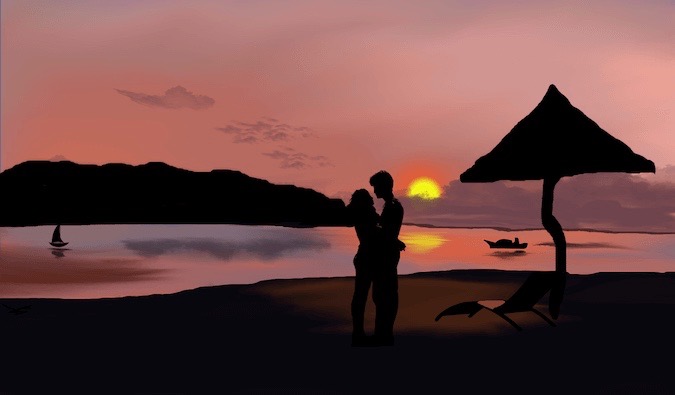 This is a guest post by Ayngelina of Bacon is Magic.

One of the biggest sacrifices I made in order to travel was leaving a relationship. Naturally, one of the very first questions people ask me is what it’s like to be single on the road.

I’ve had an incredible year in Central America as a solo female traveler, and I’ve learned on the way that having a relationship on the road can be a tricky balance of exhausting and exhilarating.

Age
Most people assume the biggest hurdle for a woman in her thirties would be to find love at all. Sure, at first it can be frustrating to see men your age chasing after gap-year backpackers who likely couldn’t buy a beer in the United States. But then you learn it’s fair game.

Age doesn’t seem to be as monumental or divisive on the road, and no one seems to care about being 10 years younger or 20 years older than you. The only painful ego blow is when you make a cultural reference that your new “friend” doesn’t understand because when it was popular, he was still in elementary school.

Cultural
We do see cultural differences when we first meet people, but we’re drawn together by those differences and lured into thinking that they’re cute and lovable.

But reality will slap you into sensibility. I learned quickly that Latin men are passionate, feel things deeply, and are attracted to the fierce independence of Western women. Seems like a match made in heaven — until you ultimately struggle over issues of jealousy over friends of the opposite sex.

Longevity
Travel seems to condense the average lifespan of a relationship, and it’s common to have a one-week love that passes through all of the phases of a traditional coupling: getting to know each other, lovers’ honeymoon, settling down, growing apart, and awkward break-up.

You can meet someone on a Monday, think the sun shines just for him or her all week, and by Sunday be happy they have to catch a flight out of the country. It’s best to accept that every season has an end, be casual friends on Facebook for a few weeks, and then never speak to each other again.

Jealousy
Hostels are fantastic for meeting people, but they are also the ultimate breeding ground for jealousy. One day you meet a great guy and seem to hit it off, spending every moment of the day together. But then a new group of girls arrives, and one of them realizes how great your guy is and makes a move.

It never ends well. You either resort to high-school tactics — hoping your “old” hostel friends you’ve only known a few days will shun her, ultimately making her move on to a new city and away from your man — or better yet, there’s a drunken night out where you confront her or him. Either way, you look like a fool for becoming psychotically attached to some boy you’ve only known for three days.

Then you move on because you’re so embarrassed and cannot bear to face any of these people ever again.

Compatibility
The thrill of sun-drenched locales and unfamiliar faces can mask the reality that you have nothing in common with your newfound love.

Sure, you can have a magical full-moon moment on the beach, staying up until sunrise talking about your dreams, but eventually you realize that, in any other location, you would struggle to hold a conversation with the very same person. You know this guy will never open a hostel or the ultimate banana-pancakes street stand. It’s a nice dream, but instead of trying to make it work, move on and let it become a nice memory.

But none of this is to discourage anyone from trying to find love on the road. The bumps along the way are what make great stories among friends that you’ll laugh and cry about later. [Matt’s note: Here are my own experiences on finding love while traveling.]

Some are lucky and do find love on the road — and that’s what keeps us all hopeful. In fact, a friend of mine met his wife in the airport, happy that the girl he’d been staring at walked over to his gate and was on his plane. Today, they have three children.

I’m not ruling out finding love in any place. And I’ll never rule out that the sun-kissed cabana boy just could be “the one.”

Ayngelina left a great job, boyfriend, friends, and apartment to find inspiration in Central America. You can read about her adventures at Bacon is Magic (which it is!).