The Ultimate Guide to Visiting Pompeii 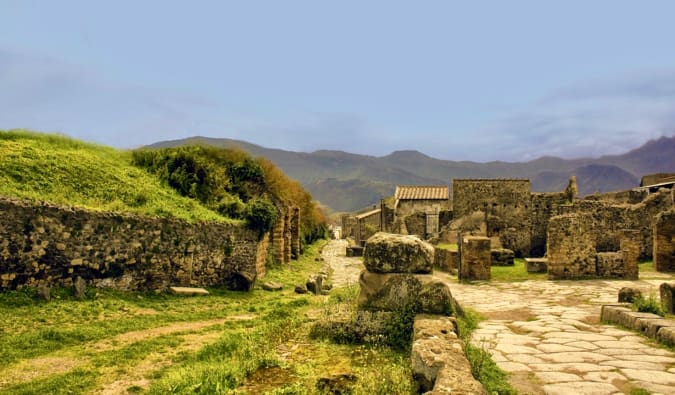 When I was growing up, I wanted to be an archeologist. I loved history, and the thought of uncovering temples and tombs in jungles excited me. I used to read books on Greek and Roman history and have discussions with my history teacher, even as young as 13. In short, I was a huge geek from the get-go.

Being such a huge history geek, visiting Pompeii, the city destroyed by Mount Vesuvius in 79 AD, has always been high on my list of things to do. The falling ash came so quickly it preserved the city just as it was. It’s a city frozen in time.

After what seems like a lifetime of waiting, I finally got to see it.

Now, I’ve traveled the world for a while and have seen plenty of marvelous ruins over the years. But this is one of the best.

The buildings, the frescoes, the streets, the pots, the bodies (yes, you’ll see bodies here) — everything is so well preserved. And even though a lack of upkeep has taken its toll on the site, I still found it a fascinating place to spend the day. My only hope is that the Italian government will get its act together to keep this site from falling into further disrepair.

Located near Naples in Italy, Pompeii takes a full day to see. If you truly want to indulge your inner Indiana Jones and visit every building here, schedule an extra half day.

I saw a lot on my full day, but there was a lot that I missed. To help you make the most of your visit,here are some of the main highlights of Pompei!

The Top 12 Attractions in Pompeii 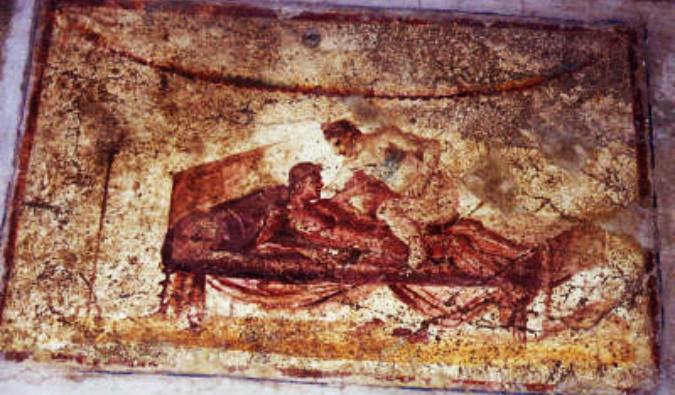 Unsurprisingly, this is one of the most visited houses in all of Pompeii (It was probably just as popular before the eruption — no pun intended — too!). 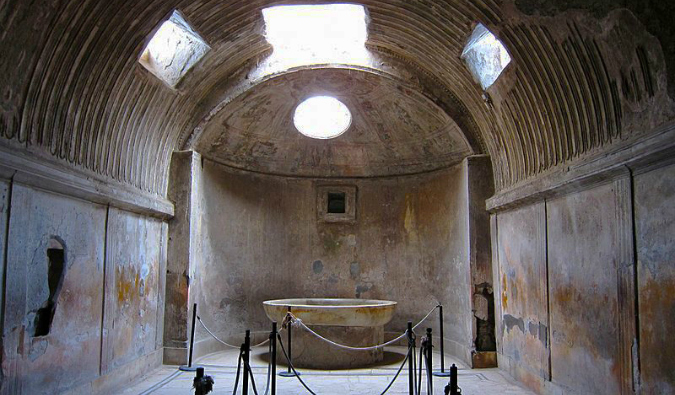 Located near the forum, these baths are incredibly well preserved. You can peek inside the wall to see how they heated the baths back when they were still in use. Their innovation is incredibly impressive, and it’s not hard to picture the baths as they were.

While the forum baths are the smallest of the various bath ruins in Pompeii, they are arguably the most elegant. There were separate areas for men and women, including separate entrances. The bath not only had hot baths but also cold and tepid baths as well.

The Villa of the Mysteries 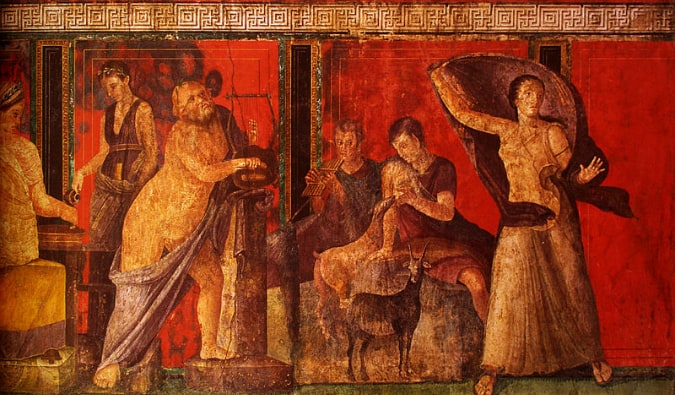 Located outside the main area, the frescoes here are amazingly well preserved and have such vibrant color. The frescoes seem to depict a woman entering into the initiations for a Greco-Roman mystery cult.

The villa was excavated long after the rest of the city (excavation of the villa began in 1909). Since it’s a bit of walk, there weren’t that many people here either. 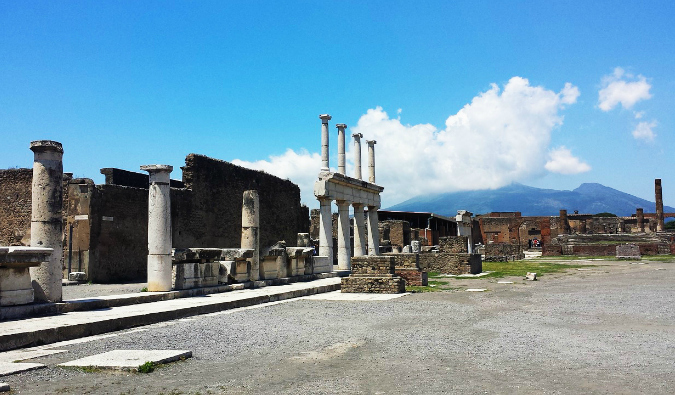 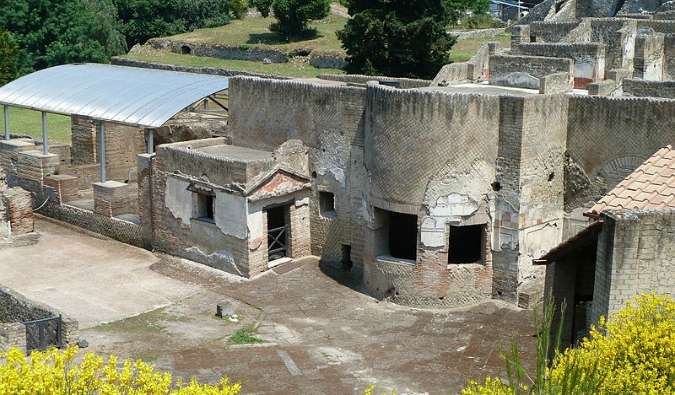 Another well-preserved bath, this one is the oldest in Pompeii. It also has a slightly bigger chamber and sees a whole lot fewer crowds. You can also see some preserved bodies here, which is unsettling (though you’ll get used to it the more you wander the ruins).

The bath area also had a gym and workout area (for wrestling, as well) and a large, almost Olympic-sized, swimming pool.

House of the Small Fountain 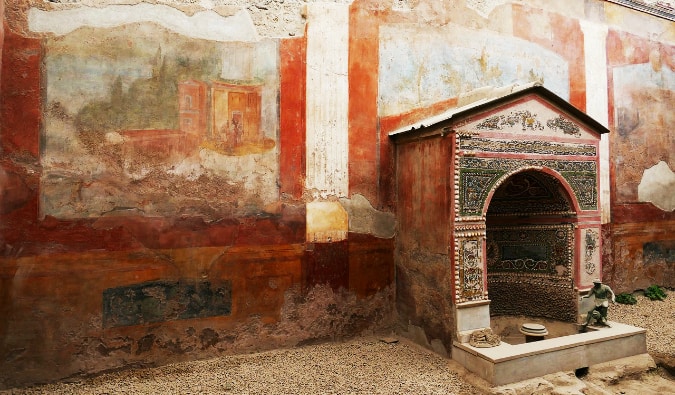 A beautiful house with a large back room, wonderful frescoes, and a beautiful mosaic fountain. Almost all of the rooms lead to the central atrium and you can see that the house was owned by someone who was perhaps a bit wealthy.

The sloped roof was used to collect rainwater, which was also used in the fountain, a great example of innovation at the time.

House of the Faun 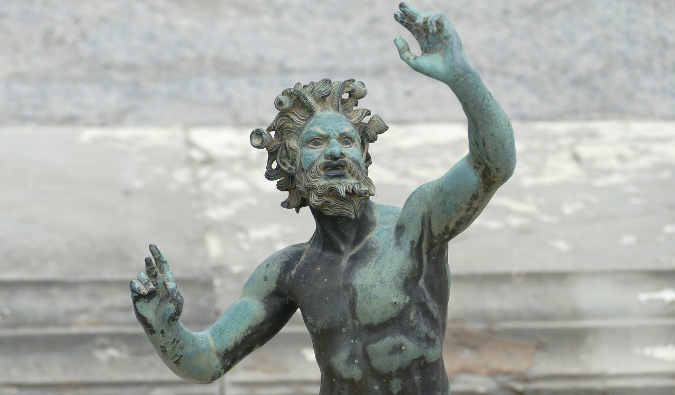 This is the biggest house in Pompeii and gets its name from the statue in the front courtyard. Built in the 2nd century BCE, there’s a large courtyard in the back where you can also find a very detailed mosaic of a battle scene.

It’s one of the most complete surviving examples of a wealthy and luxurious private residence from the time — even better preserved than many sites in Rome itself!

Garden of the Fugitives 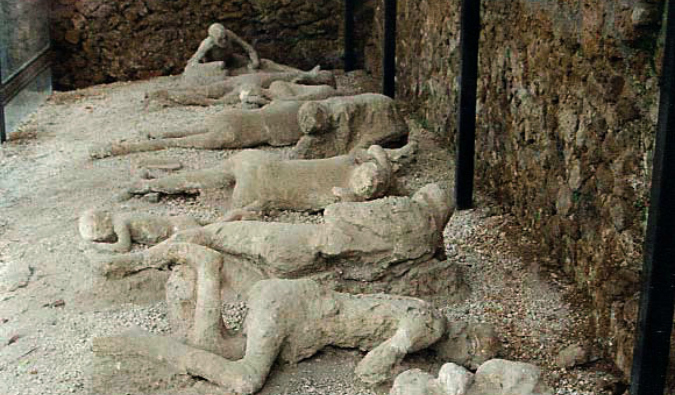 Located in the back of Pompeii, this old vineyard has preserved casts of people who didn’t make it out of the city alive. There are 13 bodies in the garden, frozen in a grotesque and agonizing tableau that reflects the horrible final moments of the city. It’s both incredibly interesting and unsettling at the same time.

House of Venus in the Shell 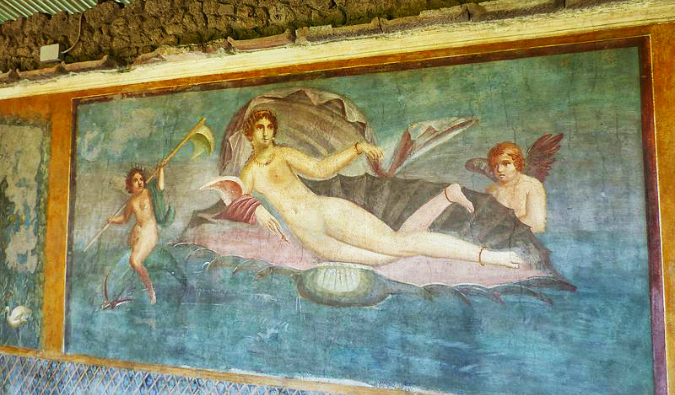 Another place located far away from the crowds, this house has a colorful fresco to the goddess Venus. There are also a few gardens here and a detailed statue of Mars.

The house was actually under renovation when Vesuvius erupted and was also damaged during the bombing in World War II (though it was restored in the 1950s). 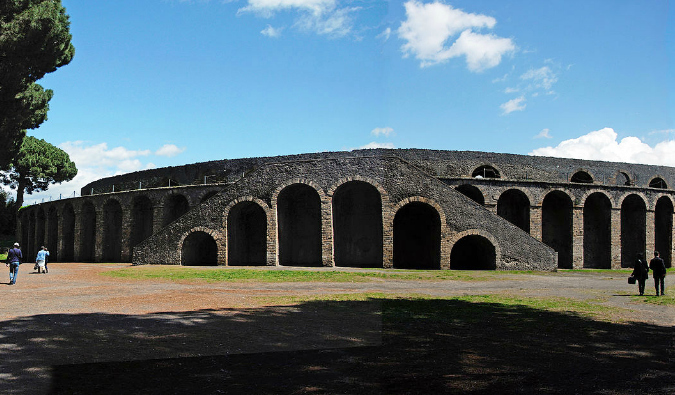 This huge amphitheater is where they held the ancient games that entertained them. It’s a quiet place to walk around and given its position at the far end of Pompeii, you’ll see very few people there, especially during the early morning or late afternoon hours. Built in 70 BCE, it’s actually the oldest surviving Roman amphitheater in existence. 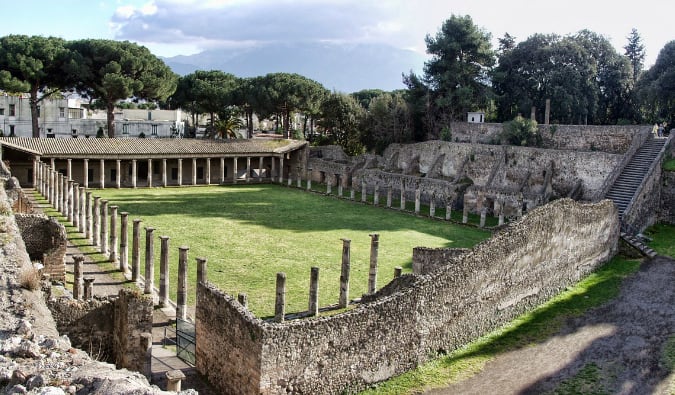 Right next to the amphitheater, the “great palace” was an exercise park and place for youth groups. It was used for sports and games, and there was also a swimming pool here as well.

It’s also a great place to escape the crowds as not so many tourists make it here. 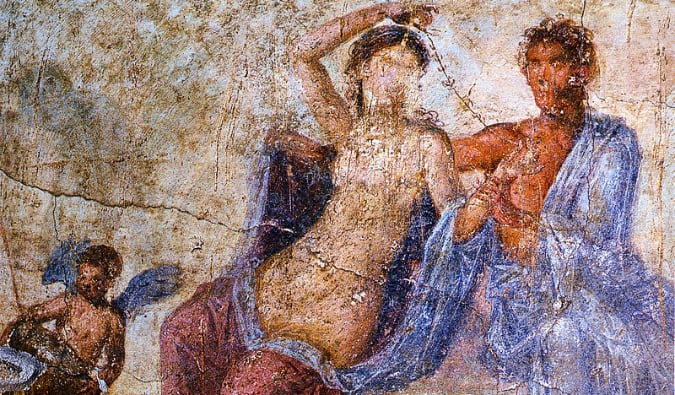 This is one of the oldest houses in Pompeii. It was most likely an inn, owing to its location and size. There’s also a small garden and covered porch in the back, a fresco of the goddess Diana, and even a little food shop in the front. 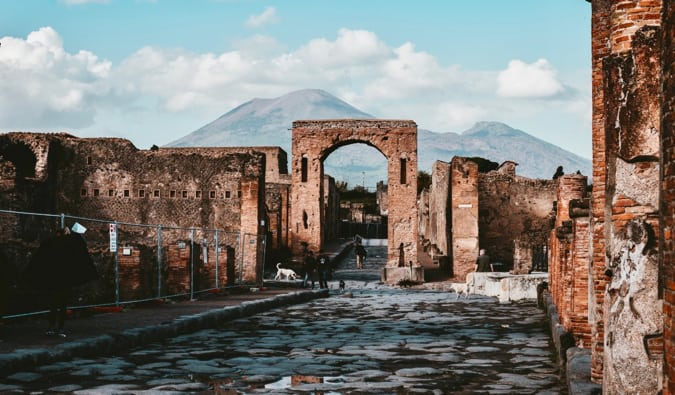 How to Get to Pompeii 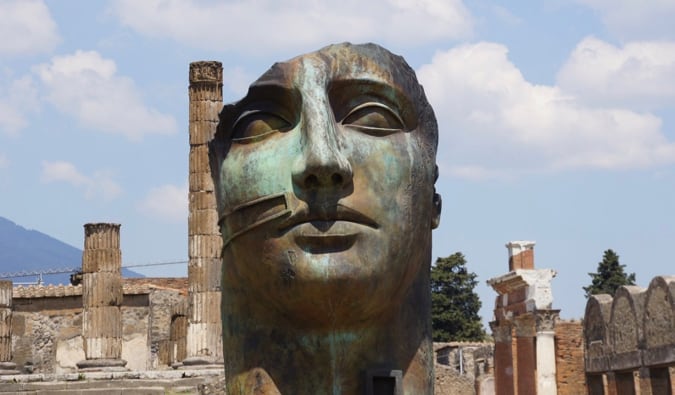 The train is the best way to get to Pompeii if you’re coming from Naples. Trains leave every 30 minutes, and since it’s a commuter train you don’t need to purchase a ticket in advance. Tickets cost 2.80 EUR per person each way.

You’ll want to get off at the Pompei Scavi/Villa dei Misteri stop, which is just a 5-minute walk from the heritage site. The ride will be around 45 minutes.

If you’re coming by car, it’s about a 30-minute drive. 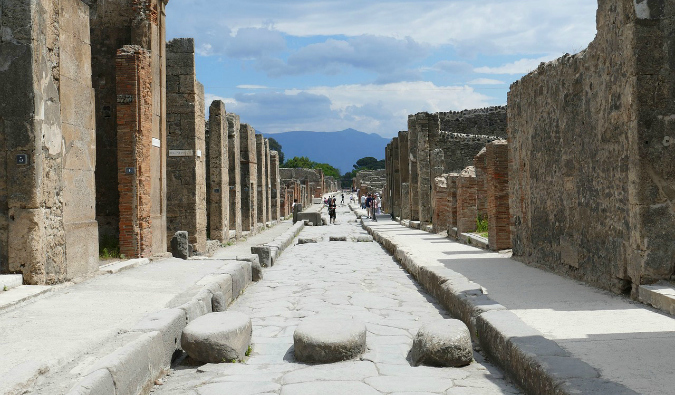 How long do you need in Pompeii?
You’ll want to spend a full day here to really see everything, though if history isn’t your thing and you just want to see the main sites, 3-4 hours will suffice.

Do you have to pay to visit Pompeii?
Yes! Tickets are 11 EUR per person if you purchase them at the gate on arrival.

Should I book a guided tour?
If you don’t have a guidebook or if you want a deeper, more insightful visit then getting a guide is a good idea. There is minimal signage here so you’ll get much more from your visit if you have a guide.

You can either book a guide on arrival (you’ll see a bunch hanging around the entrance) or go with a reputable company like Take Walks. They have a comprehensive and informative 3-hour tour of the site as well as a full-day tour that includes Pompeii and a drive along the Amalfi Coast.

Do you need to book tickets for Pompeii?
Tickets can be bought online in advance for 18 EUR per person, which includes access to Pompeii, Oplontis, and Boscoreale. If you purchase tickets at the gate for just Pompeii, it will cost 11 EUR per person.

How many tourists visit Pompeii each year?
Pompeii is one of the most popular attractions in all over Italy, bringing in close to 2.5 million tourists each year.

When should I visit Pompeii?
The summer will offer the best weather, but it will also be incredibly hot — and busy. Consider visiting in the shoulder season (May or October) in order to beat the crowds but still have nice weather.

***
In the time I was there, I barely scratched the surface of Pompeii, and I filled a whole day! One day, I’d love to go back and visit all the buildings I missed. But then again, I’m a history geek and could spend days upon days among ruins. If you don’t live and breathe history like I do, one day would be enough to see the highlights.

Make sure you move away from the city center to see some of the lesser known and less crowded sites. Walking among the ruins is an eerie but beautiful feeling.

Book Your Trip to Italy: Logistical Tips and Tricks

Book Your Train
ItaliaRail is a great resource to use when planning your trip via train around Italy. You can compare prices, routes, and schedules and save up to 60% on your tickets.

Need a guide?
One of the best ways to see Pompeii is on a in-depth guided tour, and Take Walks has my favorite paid tour. Their The Best of Pompeii Tour: Unveiling the Buried City will give you the best behind-the-scenes and historical Pompeii experience. If you want a tour, take that one.

Want More Information on Italy?
Be sure to visit our robust destination guide on Italy for even more planning tips!