How You Can Experience 1920s Paris Today 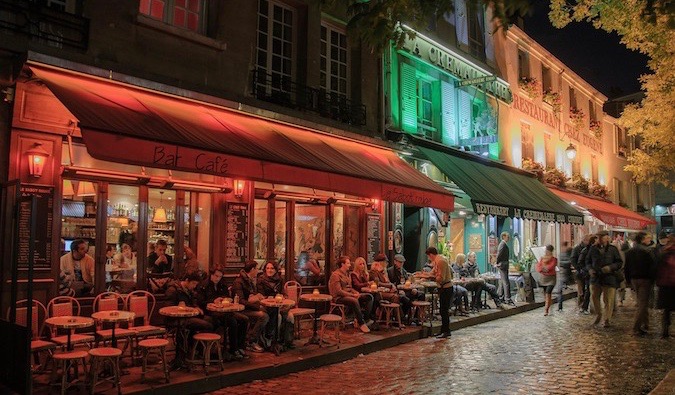 If there is one era I’d want to visit more than any other, it’s Paris in the 1920s. I’m in love with that decade. The literature, jazz, optimism, style, and atmosphere — I love it all. Midnight in Paris is my favorite Paris movie, and I often wish I could make that real life.

However, unless you have a time machine, you can’t really visit 1920s Paris. What made les Années folles special can never be re-lived — the spirit, psyche, people, and music have long since faded away.

But, as we have seen with the rise of Gatsby-themed parties and Prohibition-style bars, you can pretend! And that’s what I did on a recent visit to Paris, where there are still enough spots that recreate the era’s vibe to fill a visit.

Things to See and Do 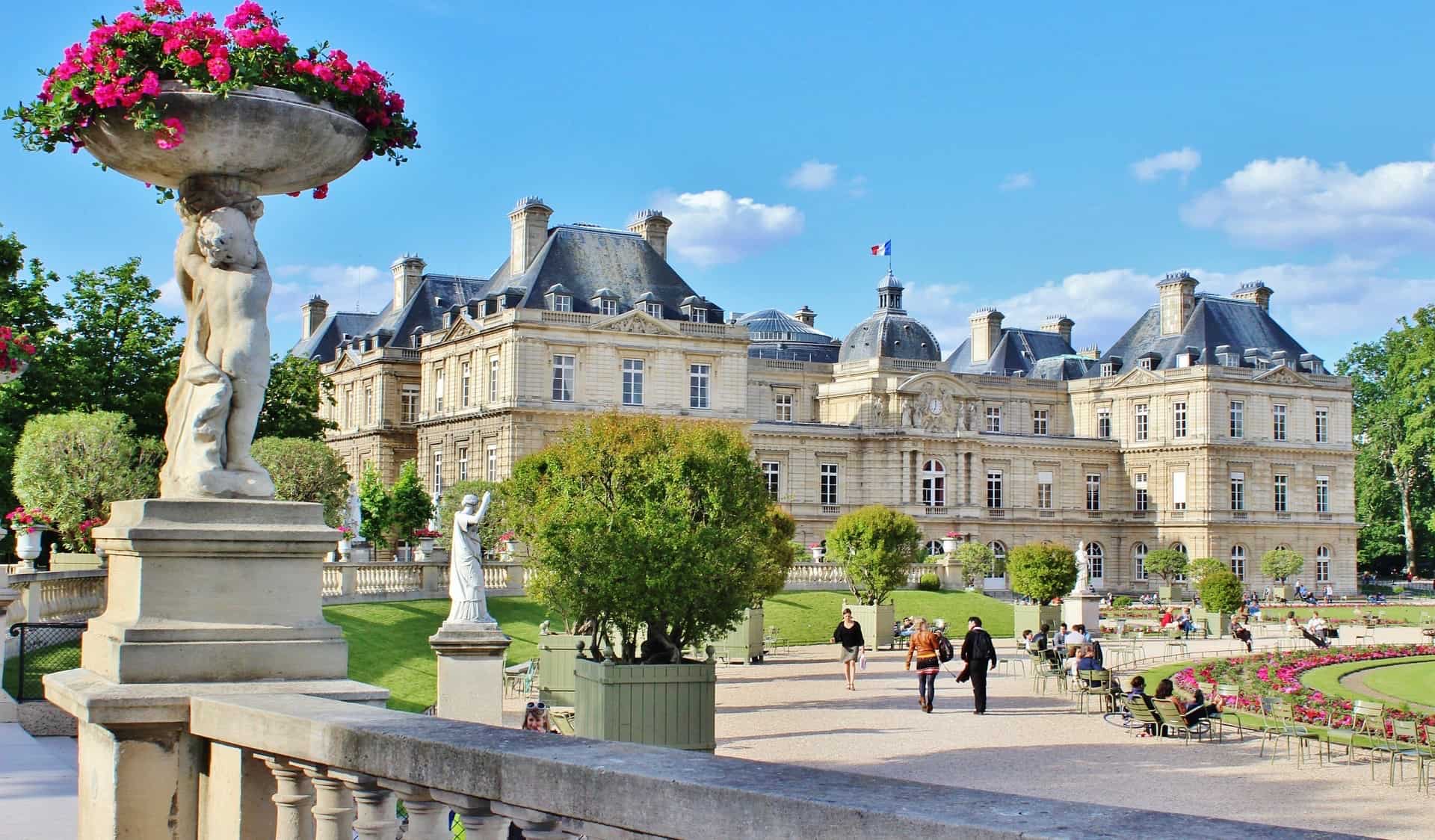 20 rue Jacob – Back in the ’20s, a lot of American expats hosted salons that would bring together artists and writers to discuss and debate specific topics. One of the most famous was led by writer Natalie Clifford Barney. Although the building she lived in has been rebuilt since her time, during the day, you can often peer into the courtyard and garden where she held her salons.

The Luxembourg Garden (Jardin du Luxembourg; 6th arrondissement) – This is one of my all-time favorite places to visit when I’m in Paris. These beautiful and gigantic gardens, which surround the Luxembourg Palace (now home to the National Assembly), are also full of walking paths, chairs to relax in, ponds and fountains, statues, and finely manicured lawns that can’t help but inspire and soothe you. On a warm day, the gardens are bursting with people. In his day, Ernest Hemingway was also a fan, and it is said he wrote a lot during his strolls around the gardens.

Shakespeare & Co. (37 Rue de La Bûcherie, shakespeareandcompany.com) – Located across from Notre Dame, Shakespeare & Co. is one of the most iconic bookshops in the world. The original store opened in 1919 and served as a popular haunt for writers such as Ezra Pound, Ernest Hemingway, James Joyce, and others who fancied themselves writers (Hemingway’s A Moveable Feast has a chapter about his visit). The original location closed during WWII. The current store and location dates to 1951. It still captures the spirit of the writer class and does a lot to support writers (it has 13 beds writers can sleep in for free!), hosting readings and events throughout the year. I love wandering through its stacks and picking out unknown titles.

Montmartre – The Left Bank was the main hangout of artists and writers, but when they crossed the Seine, they went to Montmartre, where the cheap shops, cafés, and restaurants served as a backdrop to their discussions and work. They painted in the squares, debated in the streets, and wandered the tiny cobblestone streets in solitary thought. Today, thanks to the cheap housing, the area is still home to artists and painters (though it is far more touristy)!

27 rue de Fleurus – Another salon was hosted by the famous Gertrude Stein, who lived at this address. Anyone who was anyone attended them, including Joyce, Hemingway, Pablo Picasso, Henri Matisse, F. Scott Fitzgerald, Guillaume Apollinaire, and Ezra Pound. Today, the rue de Fleurus is a quiet street and the house she lived in has been remodeled, but there’s a plaque above the address marking this famous spot, so you can sit for a moment and imagine what it would have been like to see all the greats walk in and out!

To help you get situated, consider taking a walking tour to get your historical bearings. Localers offers a comprehensive 3-hour literature tour that focuses heavily on Hemingway and also features many of the locations of Midnight in Paris. While it’s not solely focused on the 1920s, you’ll learn a lot about the era. 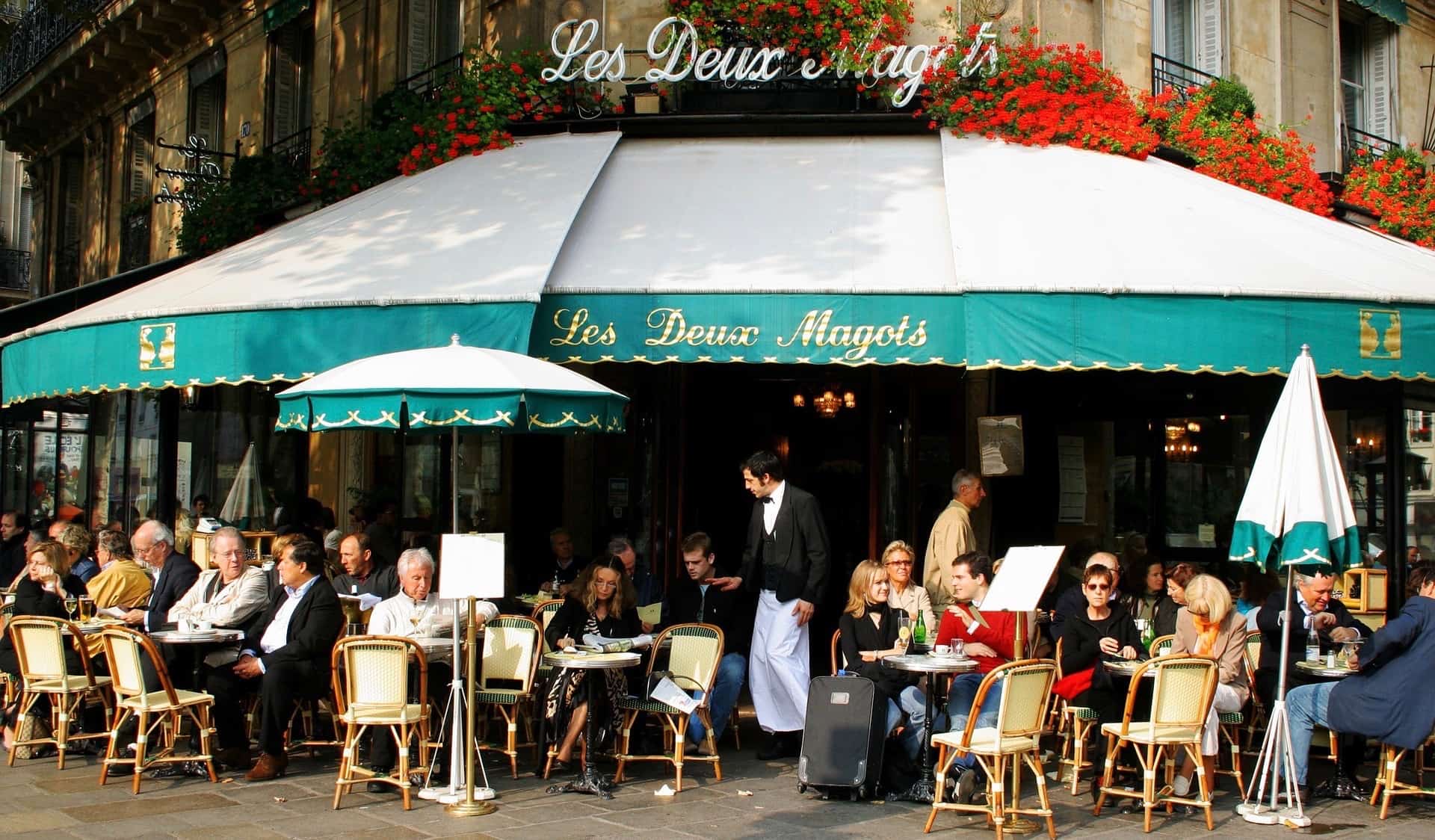 Les Deux Magots (6 Place Saint-Germain des Prés, lesdeuxmagots.fr) and Café de Flore (172 Boulevard Saint-Germain, cafedeflore.fr) – These two cafés are synonymous with the Lost Generation (those who grew up during and just after World War I). Located right near each other in the now-trendy Saint-Germain-des-Prés quarter of Paris, these cafés are where all the artists and writers hung out in the 1920s. Picasso, Hemingway (again), Simone de Beauvoir, André Gide, Jean Giraudoux, Jean Paul Sartre — they were always here. Les Deux Magots sits on the corner of Boulevard Saint-Germain and Rue Bonaparte and fills the sidewalk with its chairs and tables, while the inside retains its old look: white walls, columns, and large mirrors. Café de Flore, with its large plants and flowers in the entranceway, is cozier but also retains its old-style marble floor and red leather seats.

La Closerie des Lilas (171 Boulevard du Montparnasse, closeriedeslilas.fr) – At the far end of the Luxembourg Gardens, you’ll find this tiny little café with a dimly lit interior and large outdoor patio hidden from the street by giant plants. It is said that Hemingway first read The Great Gatsby here. Like the other venues, the interior is still identical to how was it was 1920s.

Le Polidor (41 Rue Monsieur le Prince, polidor.com) – In Midnight in Paris, this is where Gil meets his idol, Ernest Hemingway. During the 1920s, this was actually a popular location for the likes of Joyce, Hemingway, André Gide, and Antonin Artaud. Thanks to the movie, the restaurant is doing a booming business, but if you can find a seat, you’ll see that the hard-wood interior and décor have changed little since the ’20s. Imagine yourself sitting next to some famous artist of the day over delicious food and wine!

Where to Listen to Music 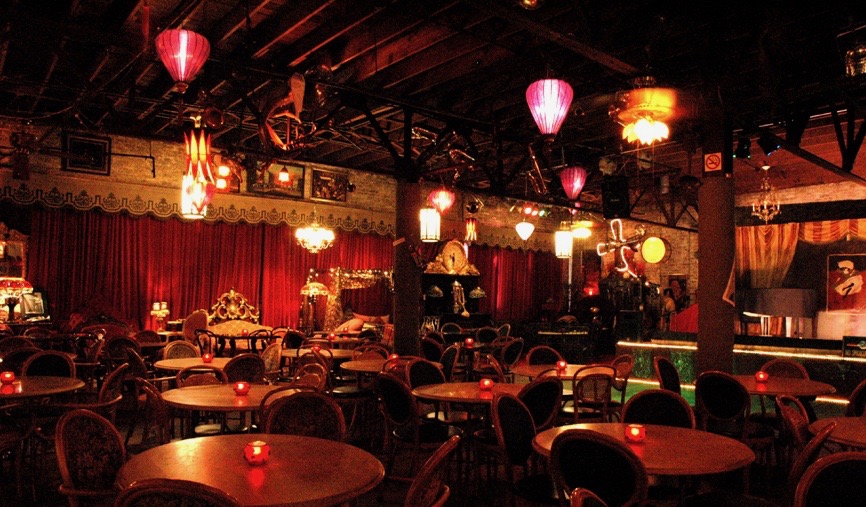 There aren’t many original music and jazz clubs left that have been around since the 1920s. Most have shifted focus, but if you want to listen to some good music, I recommend these three jazz bars:

Le Caveau des Oubliettes (52 Rue Galande, caveau-des-oubliettes.com) – An awesome club in the Latin Quarter. This small venue is an ex wine cave dating back centuries. Small and intimate, it’s my favorite of the three.

Le Duc des Lombards (42 Rue des Lombards, ducdeslombards.com) – On the right bank, this jazz club is probably the most famous (and touristy) of the city but it gets incredible acts and pumps out some of the best jazz and blues in the area! 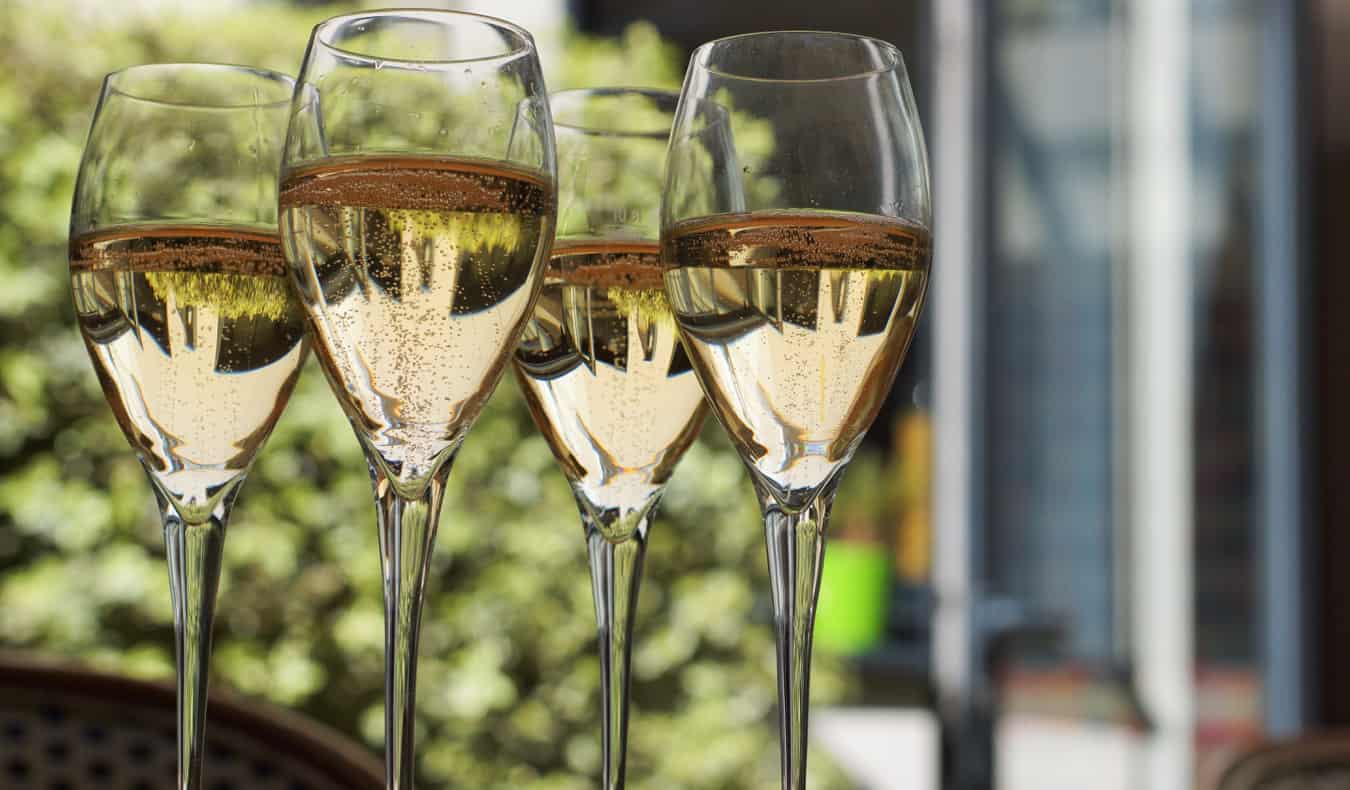 Harry’s New York Bar (5 Rue Daunou, harrysbar.fr/en) – This is where they created the Bloody Mary and the Sidecar. This nondescript bar opened in 1911 and was a popular hangout for Fitzgerald and Hemingway. The tiny bar, with its deep wood finish, carved ceilings, and red leather seats, still remains intact.

Dingo Bar (10 Rue Delambre) – This is where Hemingway first met Fitzgerald. It was popular with the Lost Generation because it was one of the few places that were open all night (and they liked to party late into the morning). Today, it’s an Italian restaurant called L’Auberge de Venise, but the original bar remains and you can still come and pretend to have a drink with “Papa.”

The Prescription Cocktail Club (23 Rue Mazarine, prescriptioncocktailclub.com) – From the street, all you see is a curtained window, but when you get inside, you’re reminded of a 1920s NYC-style speakeasy. True, this place didn’t exist in the 1920s, but if you’re looking for incredible cocktails and an ambiance and class that says “welcome to history,” slide up to the marble bar and enjoy a drink in this darkly lit bar with exposed bricks and old-fashioned furniture.

The Little Red Door (60 Rue Charlot, lrdparis.com) – Located in the Marais, this is another bar looking to recreate that 1920s speakeasy vibe. It’s easy to pass the little red door of a nondescript building that hides this beautiful small bar with brick walls, eclectic furniture, and amazing (strong) cocktails. While it lacks the true ’20s feeling of the Prescription Cocktail Club, it’s still a fun place to visit!

As Hemingway once wrote, “If you are lucky enough to have lived in Paris as a young man, then wherever you go for the rest of your life, it stays with you, for Paris is a moveable feast.”

Paris has changed a lot since les Années folles, and while it will never be the same, you can visit the old haunts and — just for a moment — transport yourself back in time and imagine what it was like.

For more in-depth information, check out my guidebook to Paris written for budget travelers like yourself! It cuts out the fluff found in other guides and gets straight to the practical information you need to travel and save money in one of the most beautiful and romantic cities in the world. You’ll find suggested itineraries, budgets, ways to save money, on- and off-the-beaten-path things to see and do, non-touristy restaurants, markets, and bars, and much more! Click here to learn more and get started!

If you’re looking for more places to stay, here for my favorite hostels in Paris. If you’re wondering what part of town to stay in, here’s my neighborhood breakdown of the city!

Here’s a list of my favorite hostels in Paris in case you want more options than what is listed here!

Want More Information on Paris?
Be sure to visit our robust destination guide to Paris for even more planning tips!