Gaudi’s Barcelona: A Unique Way to See the City 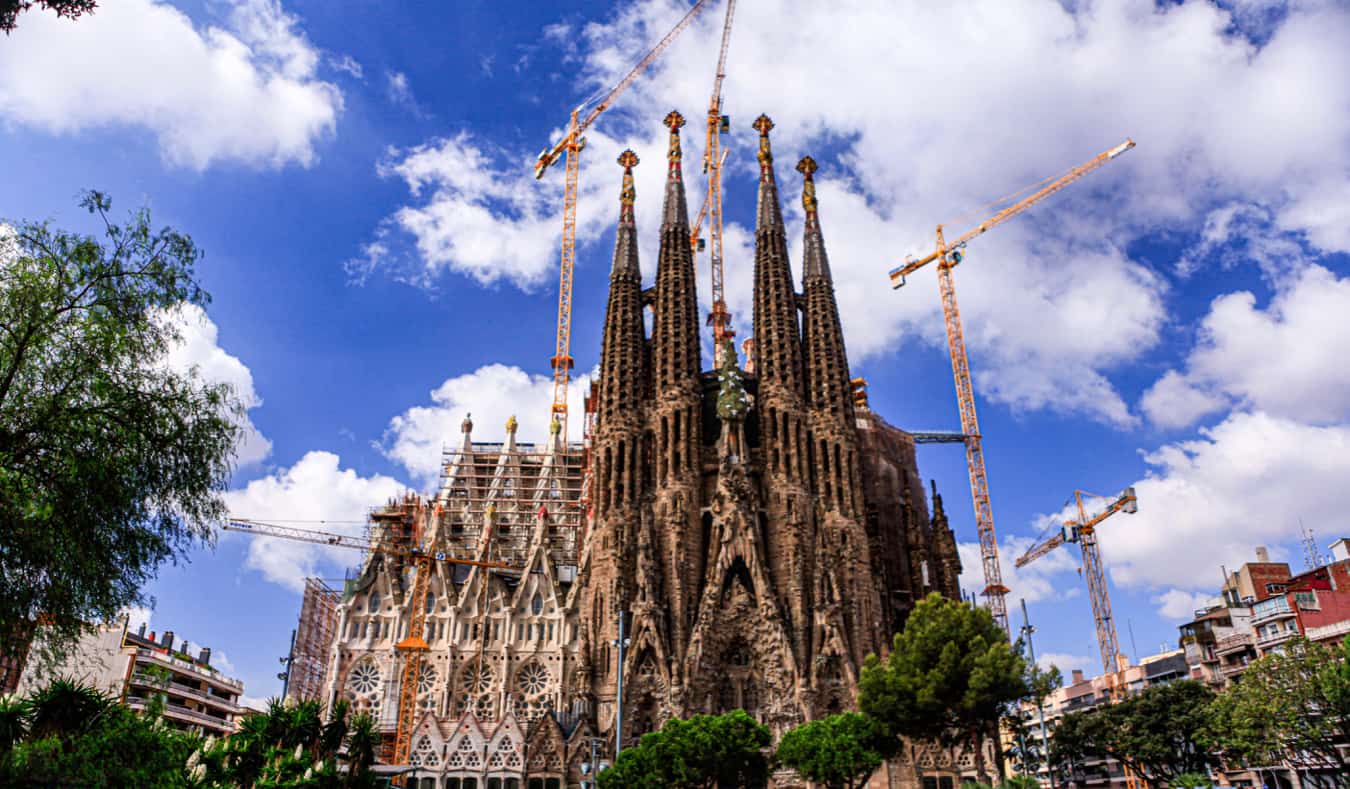 You can’t visit Barcelona without seeing Gaudi’s influence everywhere you go. He’s the city’s most famous architect and helped shape the design of the city during its booming 19th and early 20th century. His influence still shapes the city today.

Born in 1852, Anton Gaudí belonged to the Art Nouveau movement, with his first designs being centered around Gothic and traditional Catalan architectural styles. However, it wasn’t long until he developed his own style that has set him apart from all others.

Referred to as “God’s Architect” for the religious themes in his work, several of Gaudi’s creations have actually been declared UNESCO World Heritage Sites. His most famous work, La Sagrada Familia is not only the most popular attraction in Barcelona but the most visited monument in all of Spain.

Gaudi died tragically in 1926 after being hit by a streetcar on his way to church. He was knocked unconscious and, because he didn’t have any identification on him, people assumed he was a beggar and just left him there (nuts, huh?). He was eventually taken to a hospital but, by the time people realized who he was, it was too late. He died of his injuries shortly thereafter.

Since then, his influence on the city’s landscape has continued with many of his pupils making buildings in his style and the work at the Sagrada Familia continuing on to this day.

No visit to Barcelona is complete without taking a tour of his work. It will give you insight into the history and growth of the city and just help you understand just how important this man is to Barcelona. Barcelona is simply not Barcelona without Gaudi.

Here is my guide to visiting all of Gaudi’s best sights in Barcelona: 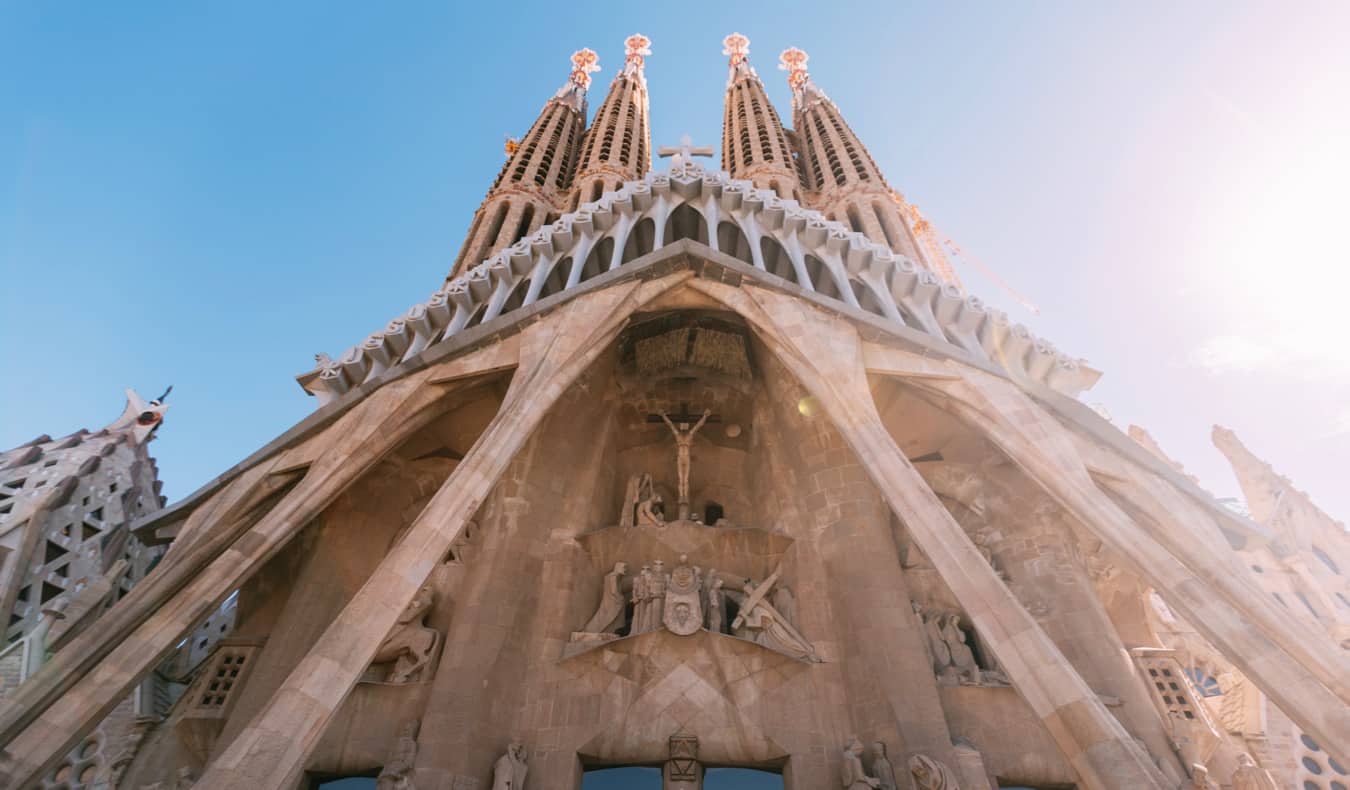 The most famous of Gaudí’s work….and the one that seems to never be finished. The church has been under construction for over 100 years (the groundbreaking was in 1882 and is supposed to be done in 2030!). Gaudí was a devout Catholic and spent the last 10 years of his life working on this project. The church blends influences of man, nature, and religion in its detailed architecture. The audio guide is worth purchasing as it covers the history of the church in great detail. Try to visit mid-morning to late afternoon so you can witness the sunlight cascade throughout all the stained glass. 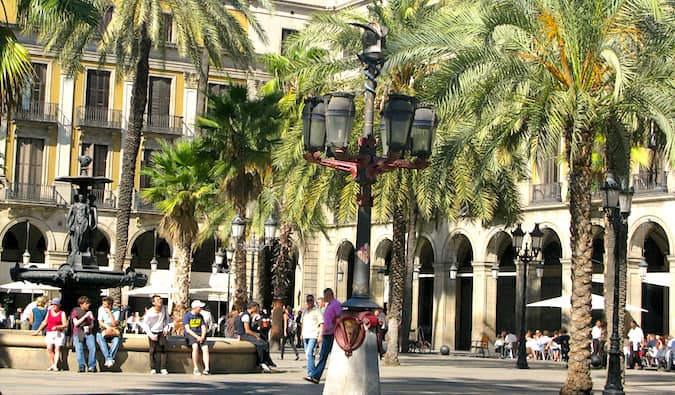 The first commission that Gaudí received after graduating from school was to construct street lamps for the city. At the request of the city council in 1878, he designed lamps with three and six arms and crowned by a winged helmet. They were symbolic of the commercial power of Barcelona, made of cast iron and marble. They’re all gone now except for the ones left in Placia Real and Pla del Palau.

Placia Real, just off La Rambla. They are located in a public square so are accessible 24/7 and free. 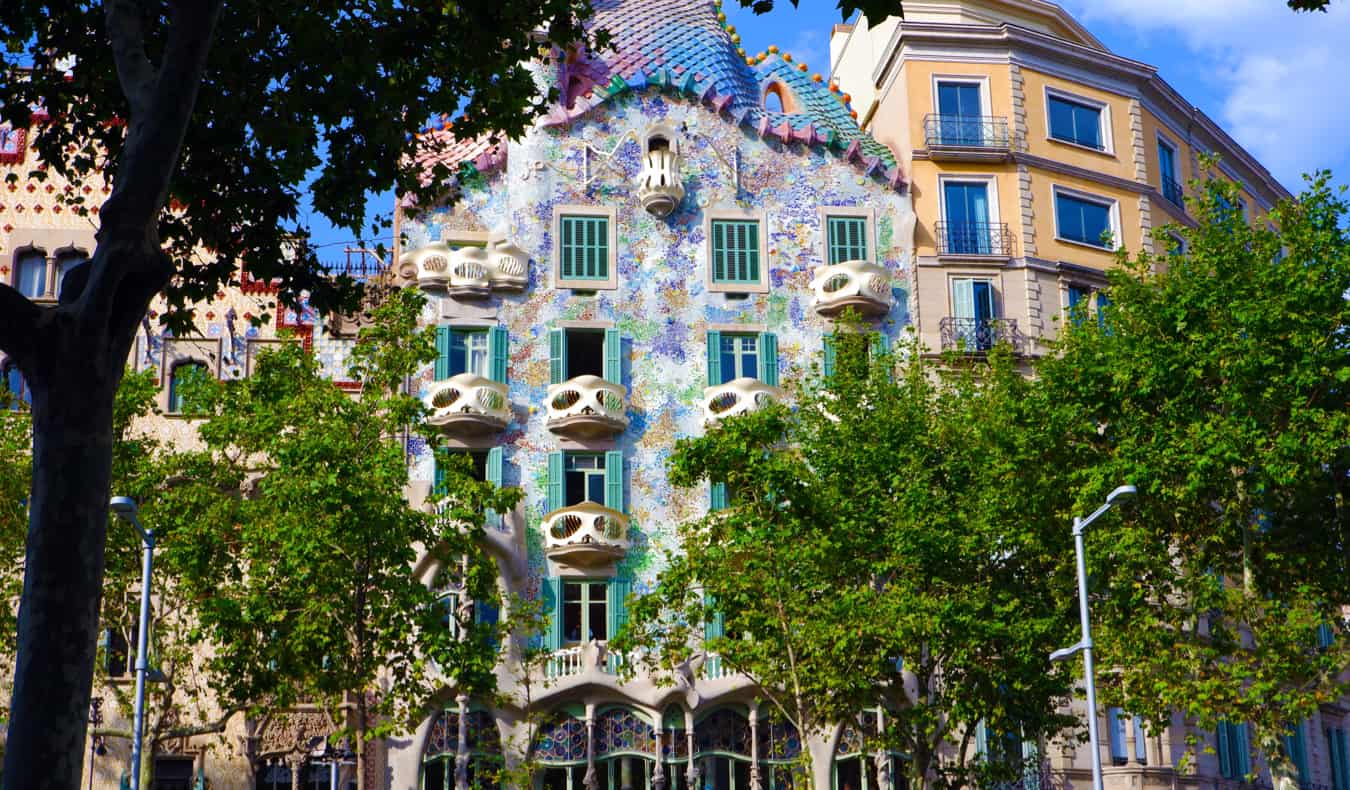 Casa Batllo is a building restored by Antoni Gaudí in the early 1900s. He spent 2 years on the project completely revamping the exterior, main floor, patio, and roof. With its undulating shape, it’s definitely one of the more eye-catching of his creations. Located in the Eixample district of Barcelona, it (like everything Gaudí designed) was heavily influenced by the Art Nouveau style. The facade was decorated with a mosaic made of broken ceramic tiles that he collected from the trash of a nearby glass shop. The roof is arched and has been likened to the back of a dragon. It’s one of my favorite Gaudí buildings. 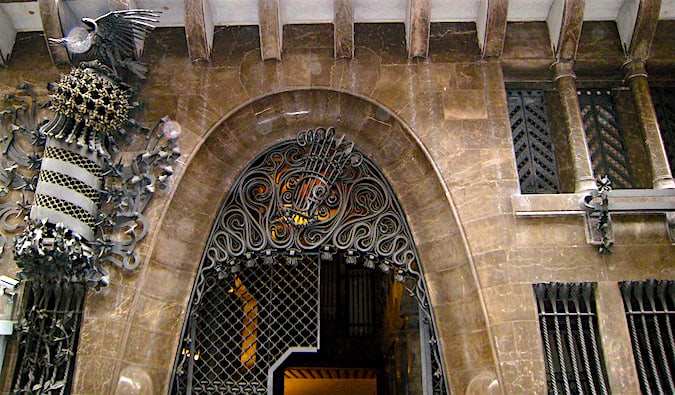 Located off La Rambla, Palau Guell (Guell Palace) building doesn’t jump out at you like other Gaudí structures. Built from 1886-88, it was designed for one of Gaudi’s patrons, Eusebi Güell. The home is centered around the main room used to entertain high-society guests. The main party room has a high ceiling with small holes near the top where lanterns were hung at night from the outside to give the appearance of a starlit sky. There are colorful tree-like chimneys on top. It’s a bit creepy and gothic to me. One of my favorites too! 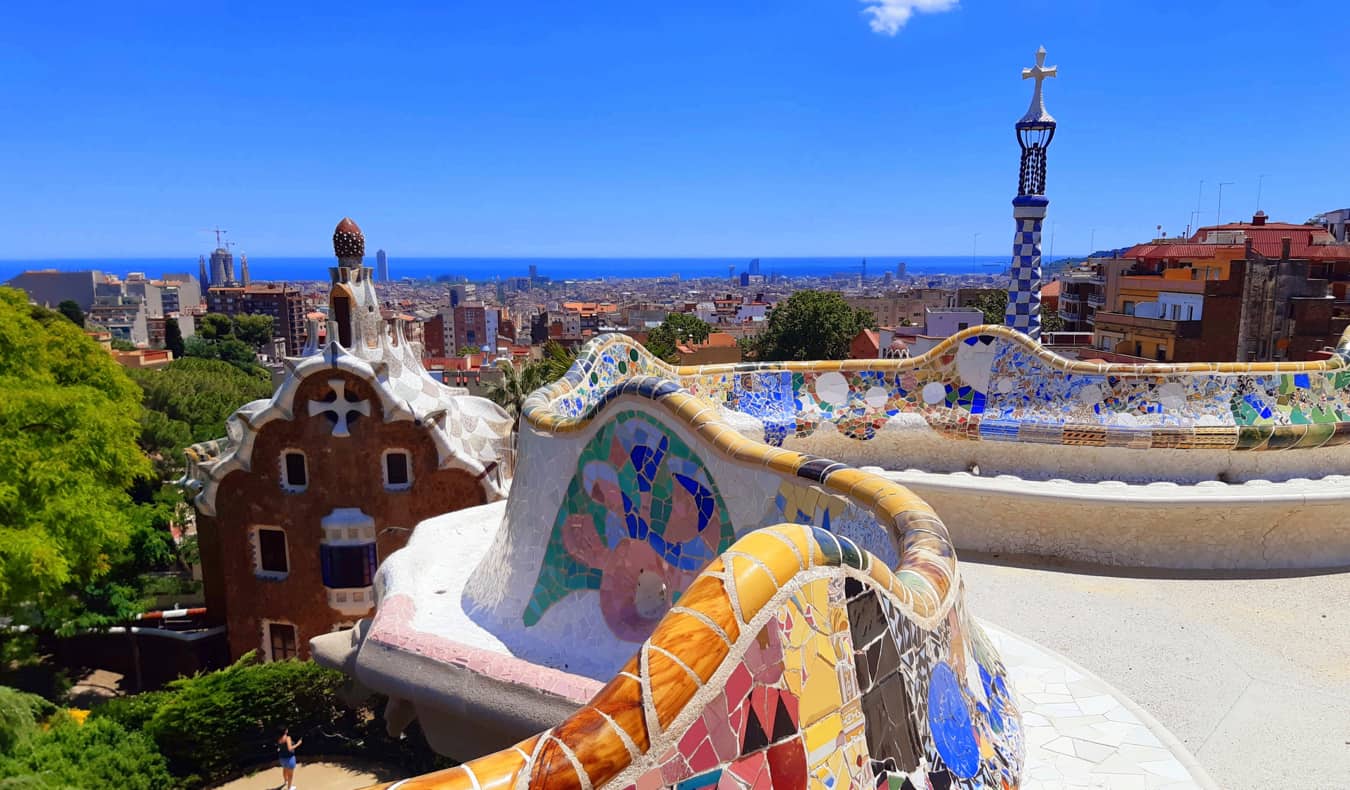 Park Güell is a 45-acre garden complex designed and built between 1900 to 1914. It’s since been converted into a municipal garden and is now a World Heritage Site. The focal point of the park is the main terrace, which is surrounded by a long bench in the form of a sea serpent. Known for incorporating various themes into his work, Gaudí incorporated artistic elements of Catalan nationalism as well as ancient poetry and mysticism into this work. The park is right near La Sagrada Familia so it’s easy to visit both. I like how colorful everything in the park is! 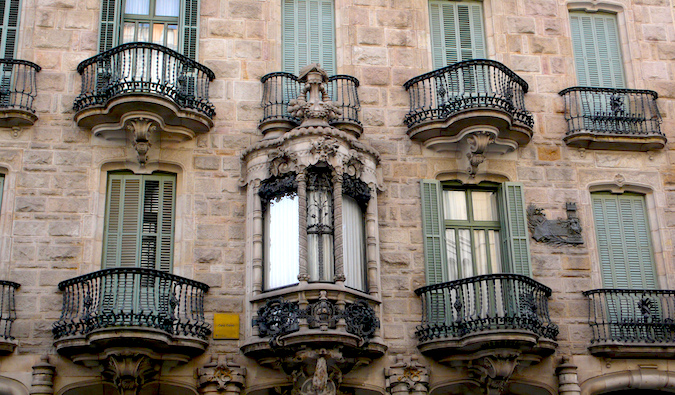 Built between 1898-1900, Casa Calvet was built for a textile manufacturer in the Eixample district of Barcelona. This building is the most conventional of his works, partly because it had to be squeezed in between older structures and partly because it’s in one of the nicest sections of Barcelona. The house’s symmetry, balance, and orderly rhythm are unusual for Gaudí’s works. The curves and double gable at the top and the projecting oriel at the entrance are modernist elements. He also incorporated mythological and natural motifs, which helped him win the award for the best building in 1900 from the Barcelona City Council.

Carrer de Casp 48. You can only stop by to take pictures of the outside of the building as you aren’t allowed into this private residence. 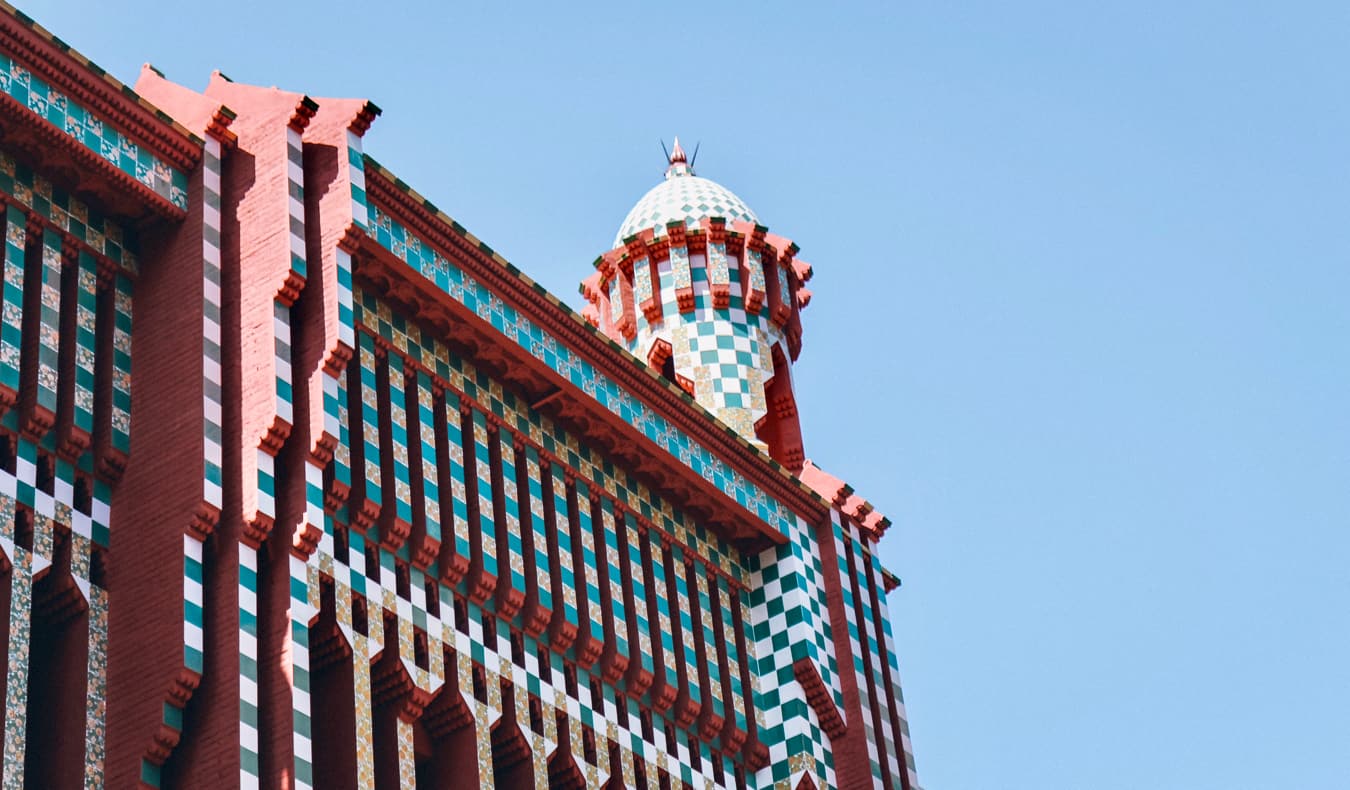 Casa Vicens was Gaudí’s first important work. The house was constructed between 1883-1888 and is made of undressed stone, rough red bricks, and colored ceramic tiles in checkerboard and floral patterns. The client was the owner of a brick and tile factory, so the ceramic tiles pay tribute to his employment.  This is one of Gaudi’s works that falls into his “orientalist” period, as his work has more Middle Eastern/Far Eastern influences. It’s very different from his other sites (and often has the shortest line). 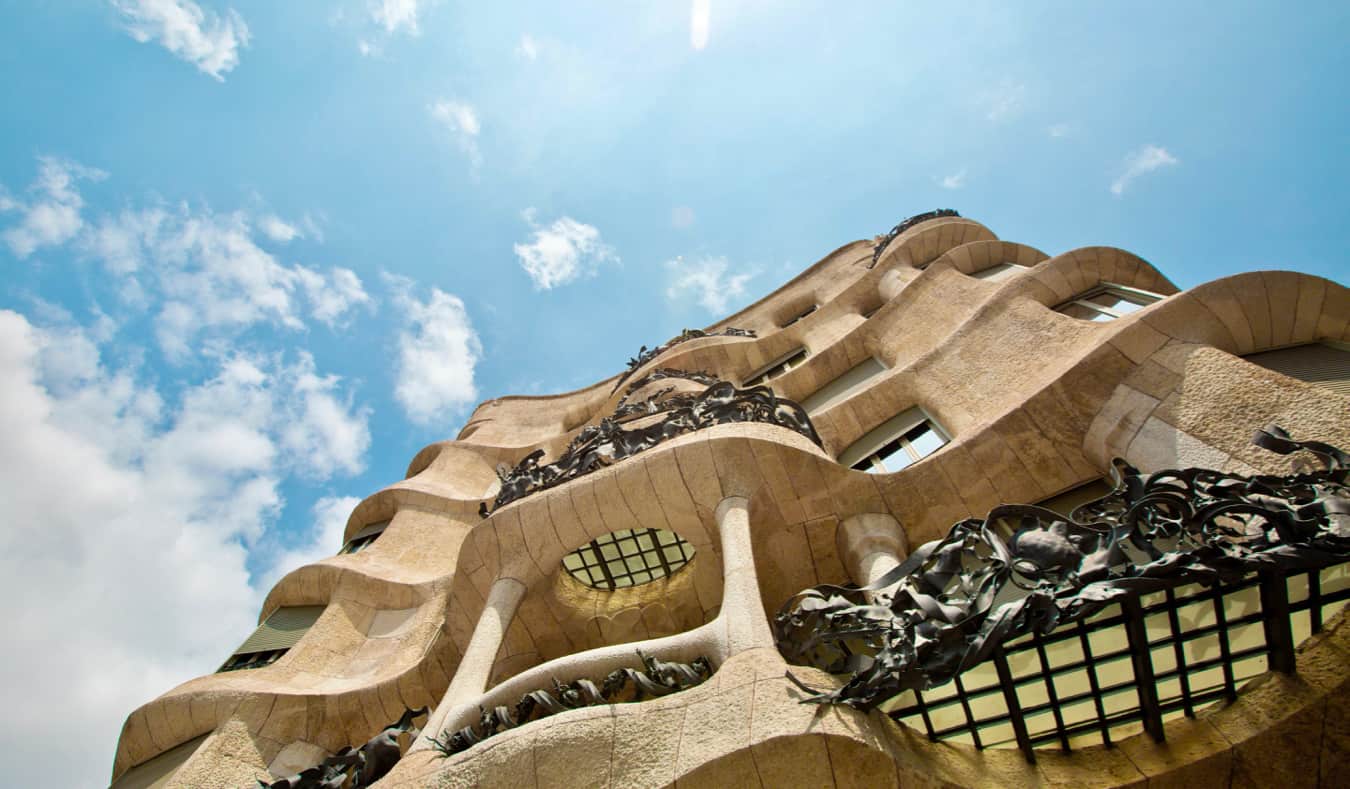 From 1906 to 1910, Gaudi work on Casa Mila, also known as “La Pedrera” (the stone quarry) as the building has a facade of limestone. The goal was to evoke the sense of a snowy mountain. Gaudí, himself a Catholic and a devotee of the Virgin Mary, also planned for the Casa Milà to be a spiritual symbol and included many religious elements like an excerpt from the rosary prayer on the cornice and statues of Mary,  St. Michael, and St. Gabriel. Casa Milà became run down and partially abandoned until it was restored in the late 1980s to its original form. 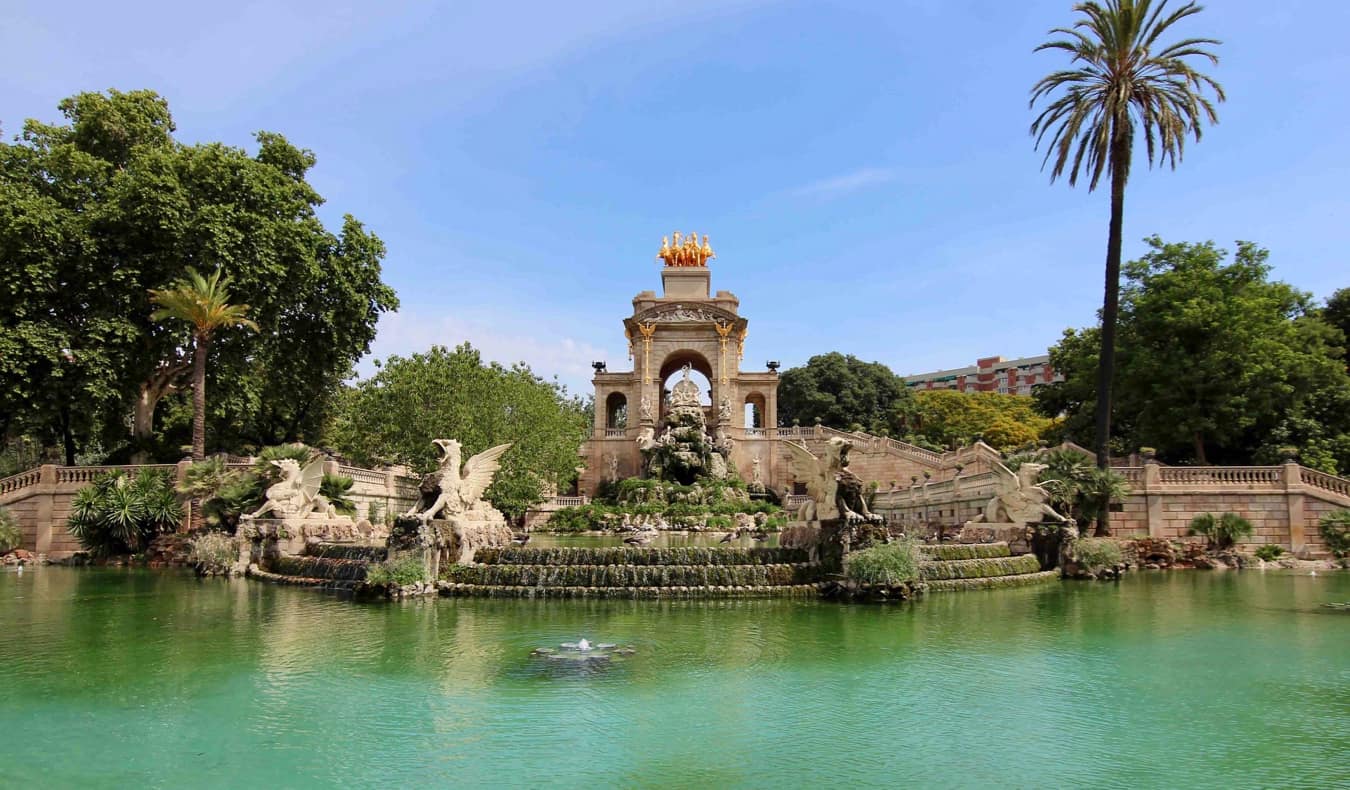 Gaudí helped design this while he was still a student. He was responsible for the design of the fountain, the bandstand, and the park’s entrance gate, a project that stretched from 1873 to 1882. Baroque in style, the fountain is massive, intricate, and awe-inspiring. I loved sitting in the park and just staring at it. If you visit most of the sites on this list, you’ll see the evolution of his style and how different this is from his other works.

Passeig de Picasso 21. The park is open daily from 10am-10pm. Admission is free. The building looks like a fortress, this is a convent school that Gaudí designed for The Order of Saint Teresa of Jesus. The project was already underway when Gaudi became involved, but he made some changes to the plans to better reflect his personal style and vision. The Bellesguard Tower, also known as Casa Figueras, was built by Gaudí between 1900-1909. It was built as a second house for Figueras and meant to feel like a medieval fortress with sporting towers and battlements. There are some Art Noveaux elements mixed in here that give it a modernist take on a classic Gothic structure.

Gaudí was a prolific architect and wandering around Barcelona, you’re sure to bump into many of his major and lesser works. More than that, you’ll see his influence throughout the city as other architects and his students copied his style in their own work. I often look at buildings and go “Ahh that must be by Gaudi too” only to find out it’s not. That’s how strong of an influence he has on Barcelona.

As I love traveling with a theme, searching out Gaudi’s works is a great theme to explore with when you’re in Barcelona.

Book Your Trip to Barcelona: Logistical Tips and Tricks

Need a Guide?
Barcelona has some really great guided Gaudi tours. My favorite company to go with is Take Walks. Their “Complete Gaudí Tour” will give you the best in-depth and behind-the-scenes Gaudi tour out there.

Want More Information on Barcelona?
Be sure to visit our robust destination guide to Barcelona for even more planning tips!