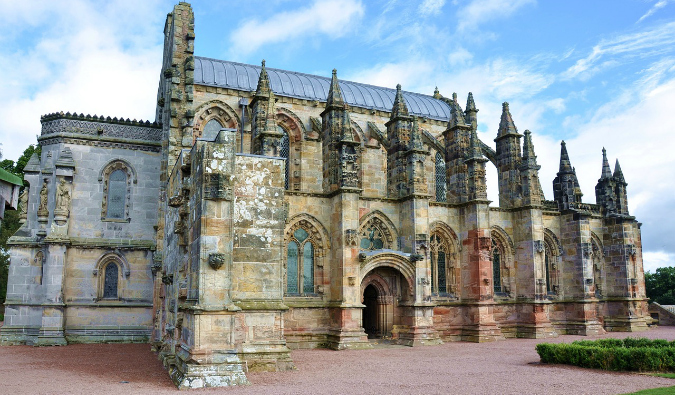 Dan Brown may have brought this chapel into popular culture in his book The Da Vinci Code, but this chapel was famous in its own right long before that. Rosslyn Chapel has been loved for both its amazing decorative artwork as well as the mystery that surrounds it with people for decades.

Located 45 minutes outside of Edinburgh, Rosslyn Chapel, properly named the Collegiate Church of St. Matthew, was founded on a small hill near Rosslyn Castle in the mid-15th century. The chapel was founded by William Sinclair of the Sinclair family, a noble family descended from Norman knights who moved to Scotland when they fell out with William the Conqueror in the 11th century.

The purpose of the church was to celebrate the Holy Mass for all the faithfully departed, including the deceased members of the Sinclair family. It was thought that a fast ticket into heaven was to have people constantly praying for your soul. The Sinclairs did what many wealthy families did: they built the church in hopes of winning points with the guy upstairs. After the Scottish Reformation, Roman Catholic worship in the Chapel was brought to an end, although the Sinclair family continued to be Roman Catholics until the early 18th century.

The chapel itself is actually quite small. Standing 12 meters tall and 21 meters long, it was originally built to be a full style Gothic cathedral in the shape of a cross. However, when William Sinclair died his son decided to stop construction. He closed up the “top” and just made the existing building into a much smaller chapel. 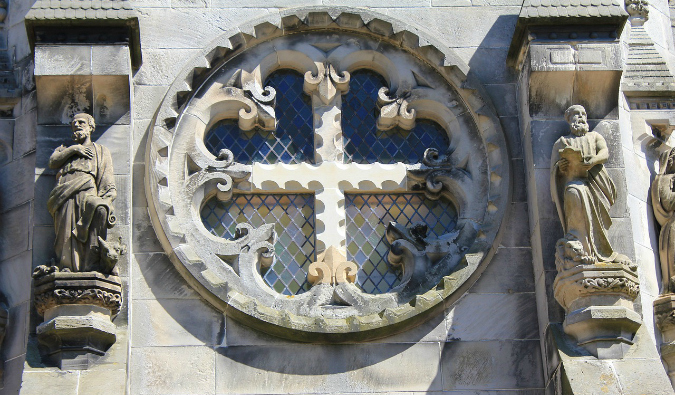 Though small, the chapel is filled with stunning architecture and sculptures that you normally wouldn’t think would belong. In this Catholic church, you’ll find Pagan fertility gods, supposed Masonic imagery, upside-down devils, biblical reliefs, references to Norse mythology, and the death mask of Robert the Bruce – all pretty unusual stuff for a Gothic church. There are literally hundreds of individual figures and scenes, including the Green Man, historically a pagan figure. The vines sprouting from his mouth represent nature’s growth and fertility.

You can spend hours looking over all the reliefs, statues, and images. They are fascinating. The most fascinating one is the American maize (corn), which was not discovered at the time this church was built. Over one of the windows, there is clearly maize, leading many people to theorize the Sinclairs had contact with America years before Columbus did. (Though that isn’t exactly revolutionary as it’s well documented that Columbus was not the first European to discover America.)

Yet no one knows for sure. The Sinclairs did support the Templars, and there is obvious Templar and Masonic imagery in the church, though some of it might have been added later. What keeps the mystery alive is that the family has kept silent over the centuries about what is in the vault, leading many to theorize they are hiding something. 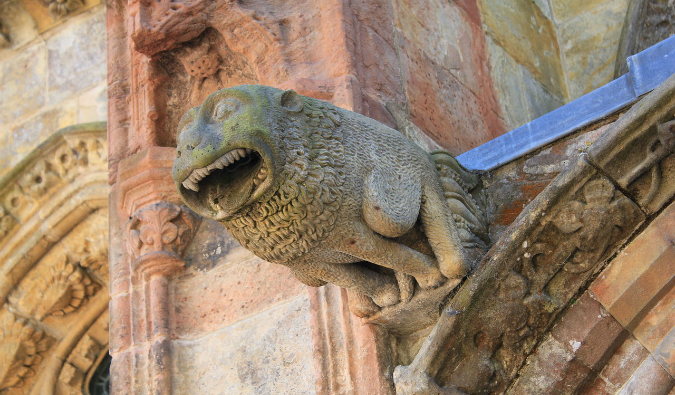 After the “Da Vinci Code” movie, thousands of people came here every day looking to find some truth in the story, and thousands of people walked away disappointed. But whether you believe in the Da Vinci and Templar theories or not, this church is still an interesting place to visit. The intricacy of the architecture will leave you captivated and breathless. And when you are finished with the church, you can walk around the surrounding hills and visit the ruins of the old castle, which is an equally good treat.

Additionally, the secrecy of the family adds to the mystery. Excavations in the 1800s uncovered foundations stretching a further 30 meters beyond the west end of the Chapel. There is also a hidden chamber below the chapel that the family won’t allow to be visited.

A visit to Rosslyn Chapel makes for a good day trip from Edinburgh. No matter your interests, it’s a trip that should not be missed by anyone. If you don’t have a car, you can take a local bus from the city and it will drop you off right in front of the entrance to both the church and castle ruins. Honestly, though it is small, it’s utterly amazing and I spent hours wandering the reliefs and asking questions. The surrounding grounds are also beautiful for a stroll. If you’re a fan of unusual places, make sure to add Rosslyn Chapel to your bucket list!

How to Visit Rosslyn Chapel

Located near Edinburgh, Rosslyn chapel is open every day of the year from 9:30am-5:30pm (6pm in the summer) except Christmas Eve, Christmas Day, and New Year’s. Just keep in mind that the last entry each day is 30 minutes before closing. Admission to the chapel is 9 GBP for adults while children enter free.

There are 6 guided tours throughout the day (but only 3 on Sundays) so if you have lots of questions, a tour is likely the best way to get them answered. Check the website for the most up-to-date tour schedule. If you don’t have a car, you can take bus 37 or 40 from Edinburgh to get to the chapel. Depending on traffic, it takes between 45 to 60 minutes each way.

Book Your Trip to Edinburgh: Logistical Tips and Tricks

Want More Information on Scotland?
Be sure to visit our robust destination guide to Scotland for even more planning tips!