“When did you first hear of Georgia?” Mako asked after a long drag from her cigarette. We were drinking wine outside Fabrika, an old Soviet fabric factory now converted into a multi-use center with bars, restaurants, co-working spaces, shops, artist studios, and a hostel. Mako was a Georgian guiding a mutual journalist friend on assignment.

“Hmm…” I replied taking a sip of my wine. “That’s a good question. On one level, I’ve known about Georgia for a long time, because, well, I know my geography. But, as a place that was more than just a name on a map, it’s only been a few years — when I started thinking of more unique and off-the-beaten-path places to visit — that I really thought ‘Hmm, Georgia? That could be interesting!’”

I had been in Georgia for a few days. When I left London for a trip to Azerbaijan in June, I added nearby Georgia to the itinerary as an afterthought. Friends spoke highly of the country and, since I was already going to be nearby, I thought why not kill two birds with one stone.

My original plan was to spend about a little over a week in the country, hitting some of the highlights and whetting my appetite for another trip (to me, a week in a country is never enough time).

But, after being required to head home earlier than expected, I only had time to see the capital, Tbilisi.

From the moment I got off the bus from Azerbaijan, I was in love with the city. Yes, I know. I know. That’s such a cliché. To fall for a place right away. But sometimes a destination just hits you to your core right way. The energy — the essence — of where you are just flows through your body and you feel like you’re coming home to a place you didn’t even realize existed minutes prior.

It’s as if a part of you had always been there and you were simply returning to make yourself whole again.

Such is the magic of these things. 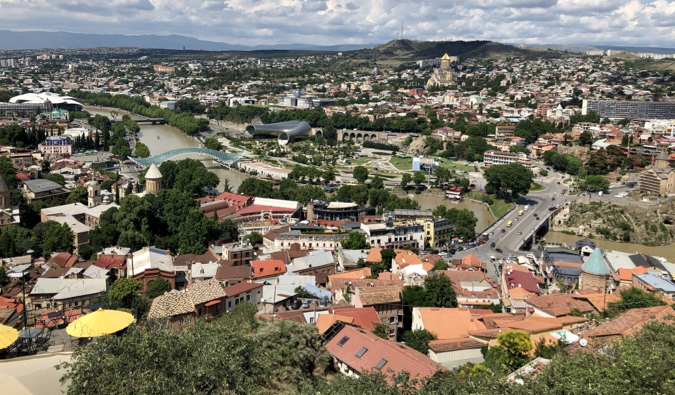 Over the next few days, that magic connection only deepened.

Before arriving, I had pictured a grimy old city with crumbling, ugly Soviet-era buildings and graffiti. In my mind, it was still frozen in the immediate fall of the Soviet empire.

Instead, I found a beautifully preserved Old Town with cobblestone streets and stunning buildings with ornate balconies; lots of spacious parks, wide streets, eclectic artist spaces, and funky cafés; and modern and sometimes futuristic architecture. It was a lot more like Europe than I had anticipated. 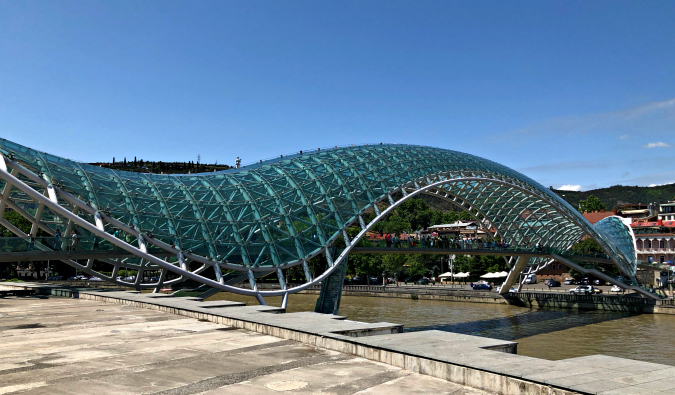 I spent my first day wandering the old town. I gazed at the Metekhi Church with its giant equestrian statue of King Vakhtang Gorgasali overlooking the Mtkvari River. This is where the king built his palace when he made Tbilisi his capital in the fifth century. (Legend has it that he founded Tbilisi while hunting and discovered the sulfur baths, but a city existed here long before he came along! He just revived it.) The simple, domed-shaped brick building is popular with locals, as legend says the fifth-century martyr St. Shushanik was buried here.

From there I walked across the bridge, toward the famous sulfur baths, a collection of brick-domed buildings containing subterranean bathhouses. These baths helped make Tbilisi famous, as the waters are claimed to help soothe symptoms in chronically ill patients, like arthritic pain or poor blood circulation. There used to be 63 of these baths in Tbilisi but only a handful are left now. They are still wildly popular, though I don’t see the charm in smelling like rotten eggs. 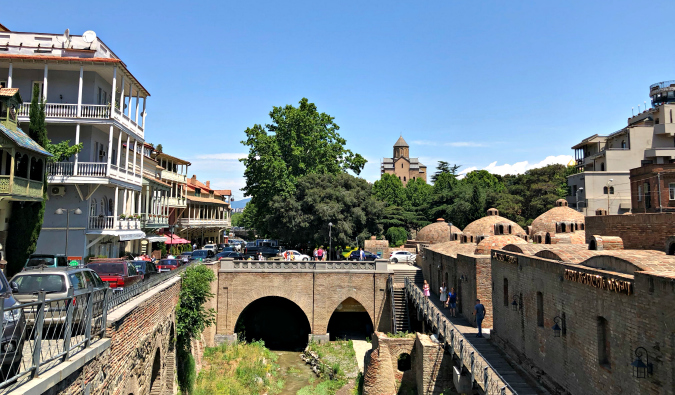 These bathhouses straddle a small river that feeds them and then meanders through a canyon that you can follow to the amazing Dzveli Tbilisi sulfur waterfall. There, the sound of the city melts away, and you feel more like you’re in a national park than a national capital.

I wandered some more and located the entrance to Tbilisi’s gigantic National Botanical Garden, where I found a zip line, tons more waterfalls and rivers to swim in (which, given the high temps during my visit, were well utilized by locals), hiking paths, and flowers and shrubbery. Amidst this peace, I often had to remind myself that I was in a chaotic major city and not some little quiet mountain town. 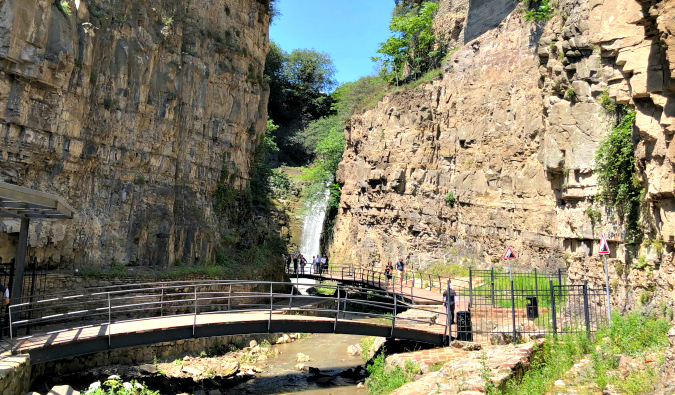 From there it was up to the Narikala Fortress, which dominates the skyline. Dating back to the fourth century, it was once a Persian citadel. Most of the walls were built in the eighth century, but in 1827 an explosion of Russian ammunition stored there wrecked the whole thing. The cliffs the ruins are on offer the best views of the entire city. You can see for miles, which is probably why the site was chosen for the citadel. A cable car connects it with Rike Park on the other side of the Mtkvari River.

The next day, I explored the city’s history museums (which, to my surprise, had a good amount of English translations). I highly recommend the Georgian National Museum, which has a detailed exhibit on the country’s history; the Nikoloz Baratashvili Memorial House-Museum, which houses materials related to the life and work of the romantic poet, period furniture, folk musical instruments, paintings, and lots of history about 19th-century Georgia; and the David Baazov Museum, which talks about Jewish history in Georgia (Israel and Georgia have a close relationship).

However, after having hiked a lot in Azerbaijan, walking in the stifling summer heat of Tbilisi wasn’t that exciting to me. So, after a day and half of sightseeing, I found myself indoors drinking tea, writing, consuming a (un)healthy amount of wine, gorging on food at Fabrika, talking to other travelers, getting to the know the staff at a local coffee shop, and hanging out with Dave.

I can’t say I really know Tbilisi. Sure, I can get around the subway now. I have an idea of what things cost. I know a little about the city and country. I met some cool people. I have a vague sense of place

But I don’t know it the way I know New York or Paris or Bangkok or a thousand other place I’ve lived or spent years traveling to.

Tbilisi is a city bursting with activity. A city of art and history. Of enjoyment. Of an energy that seemed to say, “Come enjoy the good life over wine. Don’t fret over the little things. Just enjoy the moment”

Tbilisi’s energy is my energy.

We are a match made in heaven.

I felt at home in that city.

And everyone loves the feeling of returning home.

My detailed, 200+ page guidebook is made for budget travelers like you! It cuts out the fluff found in other guidebooks and gets straight to the practical com you need to travel and save money while backpacking around Europe. You’ll find suggested itineraries, budgets, ways to save money, on and off the beaten path things to see and do, non-touristy restaurants, markets, and bars, and much more! Click here to learn more and get started!

Book Your Trip to Georgia: Logistical Tips and Tricks