38 Reasons Why I am Excited to Visit Japan 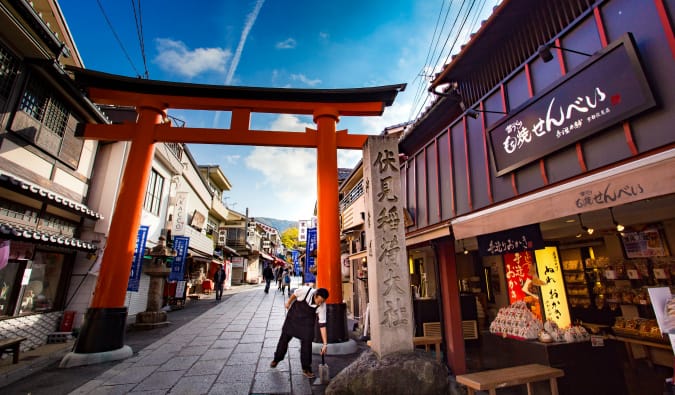 It’s my first real visit there. I say “real visit” because back in 2004, on my way home from Thailand, my friend and I stopped in Tokyo for a long layover.

After arriving at 6am, we left the airport, saw the imperial palace, realized Tokyo in January is a lot colder than Thailand in January, and camped out in a Starbucks until the sushi restaurants opened for lunch.

After eating a luxurious sushi meal, we went back to the airport.

I’ve always wanted to go back, and luckily, now I am. Next week, I’ll be heading on a two-week tour around Japan, and then I’ll be spending some extra time in the country to visit all the places not included in the tour.

I’m a huge Japanophile. Despite never really having been there, I’m obsessed with Japan — the food, culture, temples, technology, architecture. I love it all.

Whenever I get a house, Japanese art will play a predominant role in it. Out of all the trips I’ve taken in the last few years, I’m most excited about this one.

Let me count the ways:

1. Sushi – I love sushi so much, I would eat it for breakfast. Anyone who knows me knows about my sushi addiction. I suspect breakfast sushi will happen a few times. To go to the place that invented my favorite food is just so exciting!

2. Tokyo’s Ginza District – This is one of the city’s more upscale areas, dating back to the late 19th century. I’m looking forward to the famous shopping/nightlife area of Ginza and the maddening crowds that go with it.

3. Mt. Fuji – I’ve always wanted to climb this mountain and see the sunrise (traditionally, climbers make the trek overnight to arrive at the summit at dawn). While I won’t get to the climb the mountain this time, I’ll at least get to see it!

4. Bullet trains – As a lover of train travel (they’re much more eco-friendly than flying) I can’t wait to experience what is considered one of the most high-tech rides out there. Trains here can reach speeds of 400 kilometers (249 miles) per hour. That’s nuts!

There are lots of cheaper ways to get around the country too, though!

5. Kyoto – The town full of Zen gardens and temples looks to be one of the most picturesque in all of Japan. While I won’t get to see all 2,000 this visit, I’m going to try my hardest.

6. Hiroshima – In August 1945, US forces dropped an atomic bomb on Hiroshima. Around 80,000 people (30% of the city’s population) were killed by the blast while another 70,000 were injured. Understandably, the atomic bomb memorial looms large here and as a history buff, how could I not see this city and pay my respects.

I also want to see how different their perspective is on what happened. Every country teaches history from their own perspective. I’m sure we in America teach the event much different than they do. I really want to know what they think so I can expand my understanding of what happened.

7. Tokyo Fish Market – The vast majority of sushi in the world comes through this market. As a sushi lover, I can’t wait to see one of the world’s busiest and largest fish markets, even if it means waking up at 4am.

The inner fish market recently moved to Toyosu and is now know as the Toyosu Fish Market, however, the outer market (where you can find food and shops) is still in place.

8. Tokyo subway – People always talk about surviving the Tube in London, but the subway in Tokyo is the real labyrinth. Bring it on!

9. Osaka – Travelers mention this city a lot, and I want to find out why! They supposedly have a cool historic castle, fun nightlife, and a world-class food scene.

11. Zen Buddhism – When I was college, I got into Buddhism. I studied Tibetan Buddhism, but I’m looking forward to learning more about the Zen tradition, which dates to the 8th century.

12. The Emperor’s Palace – Much of the palace was destroyed in World War II, but it was rebuilt in the same style. The public can only visit the interior on a few days each year, but I’m excited to wander the beautiful outer palace grounds and walk in the footsteps of Japanese royalty.

13. Hokkaido – Just another name I keep hearing. It’s supposed to be one of the most beautiful (and least busy) regions in Japan, and I like beautiful things. Plus, they are world-famous for their Uni (sea urchin) so I have to eat it all!

14. Sake – Sake is Japan’s traditional alcohol, made from fermenting rice. I absolutely love sake and want to really learn about the different varieties and purities. I plan on taking a class. Is a sake class similar to a wine class here in the States?

15. Samurai – The samurai were the hereditary military/nobility caste of medieval and early-modern Japan. They originated in the 12th century and essentially ruled the country until their abolition in the 1870s. Samurai might not be around anymore, but there is a samurai museum in Tokyo I’ll be sure to check out!

16. Karaoke – Because nothing says I’m turning Japanese more than belting out some Lady Gaga with drunk Japanese businessmen! I’m hoping our tour ends up at a lot of karaoke bars. If not, I’ll go find some myself.

17. Pod hotels – Pod (or capsule) hotels are hotels that offer guests a small sleeping pod instead of a full room. You just have enough room to lay down and that’s about it (imagine sleeping in a cozy tube). Luxurious? Hardly! But they are cheap and very Japanese. Count me in!

18. Japanese Whisky – Japan has some of the world’s best whiskey and as someone who loves that stuff, I’m thrilled to be able to drink of the country’s best. All in the name of research, of course!

19. Sumo wrestling – Sumo has origins as far back as the 12th century and is a popular pastime (to watch) in Japan. I mean, what could be more entertaining than watching two enormous guys try to push each other out of a circle? I’m not sure I’m visiting at the right time but I hope to see a show or at least visit a training stable to learn more!

20. Castles – There are a lot of castles in Japan. After seeing so many castles in Europe, I’d like to see how another part of the world does it.

While many were destroyed in World War II, there are still plenty left to sate my curiosity, including castles in Matsumoto, Osaka, Tokyo, and Odawara! 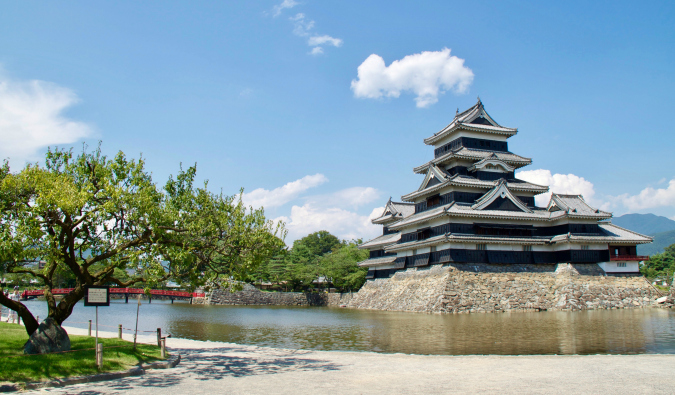 21. Technology – Japan is one of the most technologically advanced countries in the world and I’m looking forward to getting a sneak peek of the future.

22. Puppy cafés – Because space is so tight, few people have dogs at home. So they go to cafes where they can play with puppies. This I have to see! (There are lots of other animal cafes here, too, such as cat, raccoon, and even owl cafes!)

23. Cherry blossoms – I’ll be catching the tail end of the cherry blossom festival, and there’s nothing I’m more excited about. Sure, it’s the busiest time of year to visit, but from what I’ve heard, it’s worth it!

25. Nagasaki – Another place I’ve heard of and I want to know how they too teach about the atomic bomb dropping there. 75,000 people were killed when the bomb dropped, not to mention thousands more in the following weeks and months. I want to learn how the city survived and see with my own eyes how it’s thriving today.

26. Crowds – I’ve seen crowds in Southeast Asia, but Japan takes it to a whole new level so I’m really kind of oddly excited to be packed like a sardine.

28. Hiking – Japan is supposed to have beautiful pine forests and scenic hiking trails (especially up north in Hokkaido). I’m excited to escape the urban sprawl and stretch my legs!

29. Politeness – The Japanese are uber-polite, respectful, and don’t take what isn’t theirs. I’m going to test that theory out by leaving a wallet on the train and seeing if it gets returned to me.

30. Tai chi – I used to do this in college, and waking up early to practice in a park is on my list. Sure, it’s not strictly Japanese but it’s popular there and I’m sure I’ll be able to find it somewhere!

31. Hello Kitty – I’m sort of behind the times, so I have no idea if this is still a thing, but I’m hoping it is. If not, I’m sure some other quirky thing has replaced it. 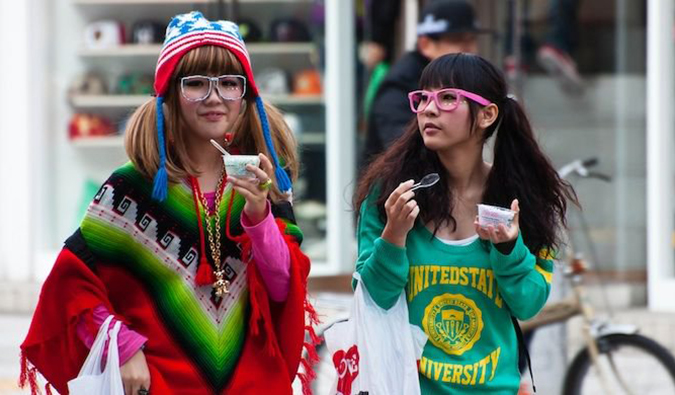 33. Kabuki theater – Traditional Japanese theater sounds like a great cultural activity. I don’t know anything about it but I’m excited to take in a performance and learn more!

34. Ramen – I want to sit in some back-alley, 100-yen ramen shop with my face over a warm, steaming bowl of delicious ramen noodles.

35. Square watermelon – I’m sure it tastes like regular watermelon, but it’s square. I got to have a piece for the kitsch factor.

36. Anime – I don’t get the whole anime/manga culture. Miyazaki films (like Princess Mononoke and Spirited Away) are great, but the culture beyond that is a mystery to me.Maybe going over there will help me figure out why it’s so big.

37. Japanese toilets – A toilet that warms my butt, cleans itself, sprays water, has perfume dispensers, and plays music? Going to the bathroom never sounded so fun. In fact, Japan even has a toilet museum! (It’s in Tokyo)

38. Sushi – See a pattern here? I bet you can guess what food I’ll be eating the most the next few weeks.

There’s a lot I am looking forward to doing in Japan, and with only about 2.5 weeks there, if I hope to tick off all 38 things on this list, I’ll be quite busy.

But since this will probably be my only trip to Japan for a while, I’m OK with that. It will be a good kind of busy.

Now, is it Sunday yet? I want to fly now.

Book Your Trip to Japan: Logistical Tips and Tricks

Be sure to check out the Japan Rail Pass if you’ll be traveling around the country. It comes in 7-, 14-, and 21-day passes and can save you a ton of money!

Looking for more travel tips for Japan
Be sure to visit out robust destination guide on Japan for even more planning tips!