A Journey Through Madagascar: Notes on the Privilege of Travel 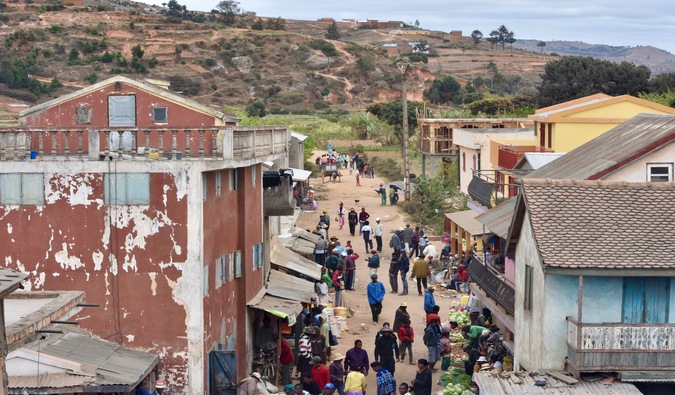 Two years ago, I wrote about how privileged and lucky we are to be able to travel the world. No matter our circumstances or our budget, the fact that we are traveling at all we are doing something most of the world will never get a chance to do. Most people never leave their own country, let alone their continent.

I wrote back then (and sorry for quoting myself):

In the “quit your job to travel the world” cheerleading that happens so often on travel websites (including this one), we often forget that it’s not easy for everyone.

There are those for whom no mindset change, spending cuts, or budget tips will help them travel — those who are too sick, have parents or children to care for, face great debt, or work three jobs just to make rent.

After all, 2.8 billion people — nearly 40% of the world’s population — survive on less than $2 USD a day! In my home country of the United States, 14% of the population is below the poverty line, 46 million people are on food stamps, many have to work two jobs to get by, and we have a trillion dollars in student debt dragging people down.

Nothing any website can say will magically make travel a reality for those people.

Those of us who do travel are a privileged few.

That’s not to say that hard work doesn’t count, but hard work doesn’t exist in a bubble — the circumstances that create the opportunities for hard work to bear fruit are often just as important as the work itself: support from family and friends, jobs that allow for overtime, a strong national currency, cheap flights, or golden passports that allow you to find work overseas.

All these things matter.

Most of us who travel aren’t barely getting by or on social assistance. Nor do we wonder if we can afford the next meal.

Traveling constantly teaches me to appreciate just how lucky I am to do what I do. It reminds me never to forget the fact that I have access to education, support systems, and resources most of the world doesn’t.

My visit to Madagascar was my most recent reminder of this.

Madagascar is a country of 26 million people that sees less than 300,000 tourists a year. Here, 75% of the population lives in extreme poverty, and 25% live in areas prone to natural disasters (floods, cyclones, drought).

Almost half of all children under five are malnourished, and the GNP is just $360 USD per capita (with 92% of the population living on less than $2 a day). Madagascar is also one of the ten countries most at risk from the effects of climate change. The country is 162 of 189 on the UN Human Development Index.

Things are so bad there was actually a recent outbreak of plague. Yes, that plague.

While I’ve seen poverty before on my travels, it’s never been as open, vivid, and widespread as what I saw in Madagascar. 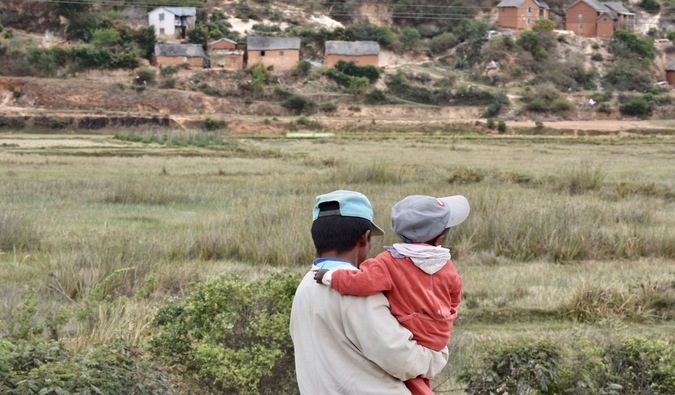 My guide Patrick told me about Madagascar’s plight: corruption, environmental degradation, poverty, poor infrastructure, and a lack of education (including sex education) that has led to overpopulation and a lack jobs. It’s a vicious cycle that never seems to end.

In Madagascar, the roads have more holes than a slice of Swiss cheese, and there are too many cars and frequent accidents. Going 250km can take up to eight hours. While I was there, a bridge on the only north-south road collapsed because a truck was too heavy for it (weight station bribes are frequent). We had to wade across a river so another bus to pick us up on the other side.

And trains? The three train lines, built by the French in the 1960s, but they only run a few times a month, are mostly used for freight, and frequently break down. They are worse than the roads.

Madagascar is a place where houses reminded me of early U.S.plains settlers: dirt and mud homes with straw roofs and one tiny window for air. When I visited, I immediately noticed the musty air and lack of ventilation. It is no wonder respiratory diseases aren’t such a problem there.

It is a country where kids wear an amalgamation of whatever they can find — and, more often than not, it is filled with holes. 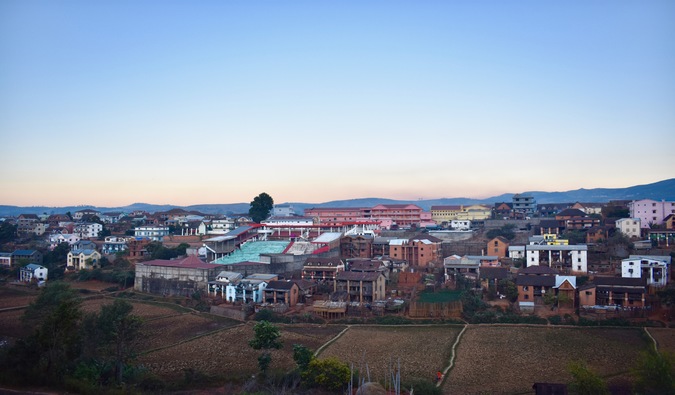 It is a country where I saw people mining for sapphires in conditions so harsh it could only be described as a scene out of Blood Diamond. This is a place where the mining industry keeps people in company towns under terrible conditions simply because they know people have no other option.

It is a place where the kind of poverty you read about became very, very real.

This is not to say I never knew this stuff existed. I’m not naïve or stupid to think the world is a fairytale. I read the news. I’ve watched the documentaries. I’ve been around the world. I’ve seen corruption, political turmoil, and poverty before.

But it’s one thing to read about stark, stark poverty and it’s another to see it in front of you.

This isn’t a situation where it’s like “Ohh, wow, it’s poverty! Let’s go take pictures for Instagram to show people who caring we are.”

No. This is one of those situations where you feel like you’re seeing reality for the first time.

This is one of those situations where your bubble bursts and what you see on TV and the news goes from abstract to real.

It’s become so easy nowadays to travel in your comfort zone and never come face to face with aspects of the world that may utterly change who you are and what you think. It’s easy to stay on the backpacker trail, on tours, or in hotels and never see anything that makes us confront our privilege. It’s easy to only see what you want to see, stare at Facebook in hostels, visit backpacker bars, take big-bus tours, fly from resort to resort, and attend cultural events designed for tourists.

We are in foreign places but never outside our bubble.

If travel is meant to push you out of your comfort zone and expand your mind, you need to visit places that do so.

And you need to put your phone away, get away from other tourists, and off the beaten path. You must challenge yourself. To me, this is part of the beauty of travel. It forces you outside your bubble, which adds perspective to life and understanding of the world. 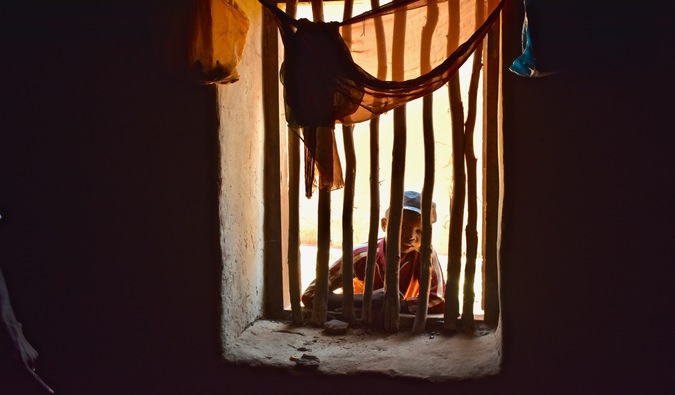 You realize how lucky you are to be able to travel — while getting to know how most of the world really lives. To see it, to experience it. While we argue on Facebook and share Twitter memes, kids go to bed hungry across the world.

This is not to say I am arguing for “poverty tourism.” This is not advocating “helping out” at some organization for a week. No. What I am saying is that going to places so different from your own can open your mind to different cultures, lifestyles, behaviors, and income levels.

But only when you break outside your comfort zone.

My trip to Madagascar was a deeply profound one because it pulled me out of my bubble and reminded me that there’s stark inequality in the world and made me want to do more about it. 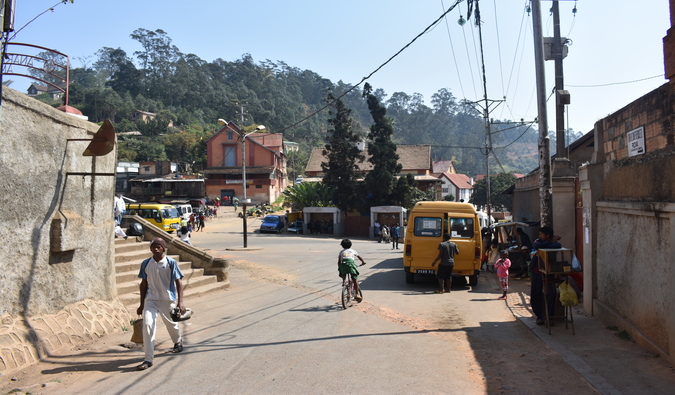 It was a reminder to resubscribe to the Ralph Waldo Emerson school of thought:

To laugh often and much; To win the respect of intelligent people and the affection of children; To earn the appreciation of honest critics and endure the betrayal of false friends; To appreciate beauty, to find the best in others; To leave the world a bit better, whether by a healthy child, a garden patch, or a redeemed social condition; To know even one life has breathed easier because you have lived. This is to have succeeded.

Words without action are nothing. I must not become too selfish and I must endeavor more to give back to the places that give me so much.

So, as I end this article, to that end, I want to highlight some good local development organizations that are working to improve the living conditions in Madagascar. I donated each.

In a country where a meal is less than a dollar, corruption is rife, and higher education is uncommon, a little can go a very, very long way.

I encourage you to seek out destinations that make you rethink your life; to find organizations that help others and the environment when you travel; to get off the tourist trail, expand your mind, open your heart, and, as Gandhi said, be the change we wish to see the in the world.

Book Your Trip to Madagascar: Logistical Tips and Tricks

Want More Information on Madagascar?
Be sure to visit our robust destination guide on Madagascar for even more planning tips!