24 Photos from My Safari to Kruger National Park 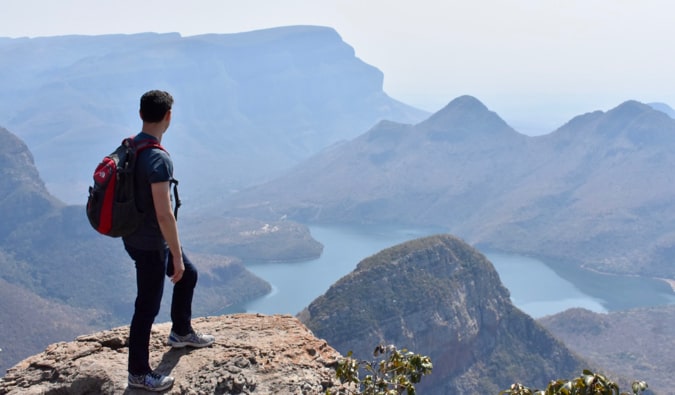 Hello again! After six weeks of travel, I am back in New York City. I was all over the US, parts of Europe, South Africa, and Madagascar.

There’s a lot — A LOT — of new content coming and I’m kicking it off today with an epic photo post from my visit. Because who doesn’t love animals, right?

When I first went to South Africa, I stuck to the west coast, landing in Cape Town and traveling north into Namibia (or “Nambia,” as El Presidente likes to call it) before trekking across Southern Africa.

Because of that, I missed one of place I’ve longed to visit: Kruger National Park.

Possibly one of the most famous parks in the world, Kruger is one of the largest game reserves on the continent and covers an area of 19,485 square kilometers (7,523 sq. mi.), sharing borders with Mozambique to the east and Zimbabwe to the north.

It was first protected in 1898 and became South Africa’s first national park in 1926. According to the government, over 1.6 million people visit it each year.

I’ve long dreamed of going on safari there, spotting lions, elephants, cheetahs, leopards, and my personal favorite, the honey badger. You always hear how great Kruger is for safaris. It’s like an animal lover’s utopia.

Last month, I finally got to tick the park off my list. I spent three days there with Intrepid Travel. It was everything I had hoped it would be. Animals to my left, to my right, and in front of me. I watched as elephants played on riverbanks and lazy lions slept the day away. Birds tried to steal my lunch as I wondered, “Where are the honey badgers?”

I saw sunrises and sunsets that made my heart go aflutter. The red sun rose and set, letting us know that he is the king of the sky. And after he retired for the day, I watched the sky twinkle with stars, unpolluted by city light, with the Milky Way clouding the sky.

There’s just something magical about being in the Africa savannah. It’s as if my Neanderthal DNA called out to me through my blood, recognizing its long lost home.

And the only way to show you that majesty is through pictures, as they do more justice to the park than my words ever could. 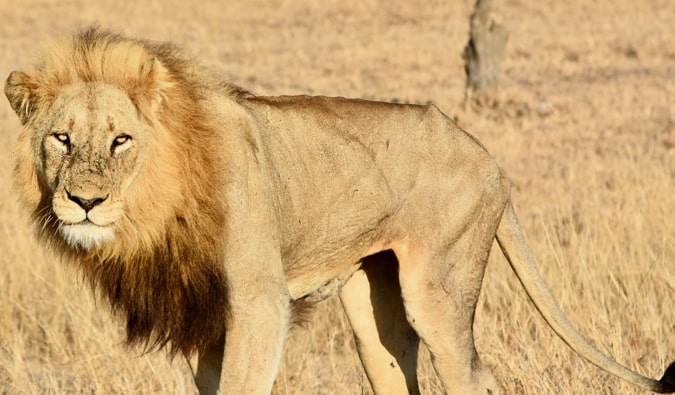 A male lion looking at me like I’m food. 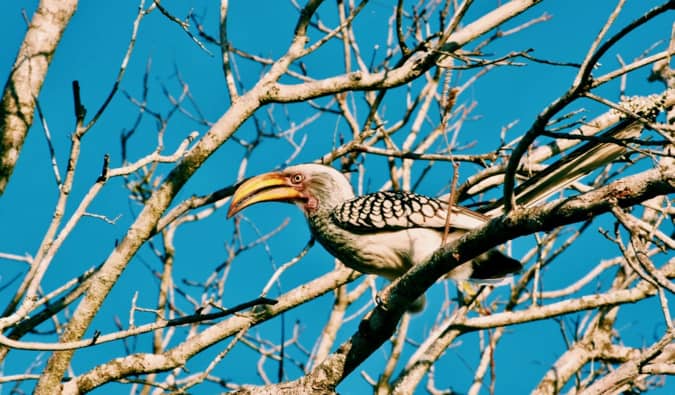 The Southern yellow-billed hornbill, which was as massive as it seemed. 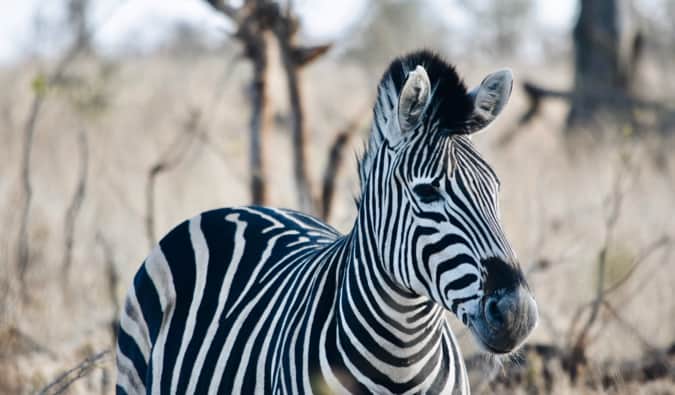 Getting up close and personal with a zebra. There’s upwards of 35,000 zebra in the park. 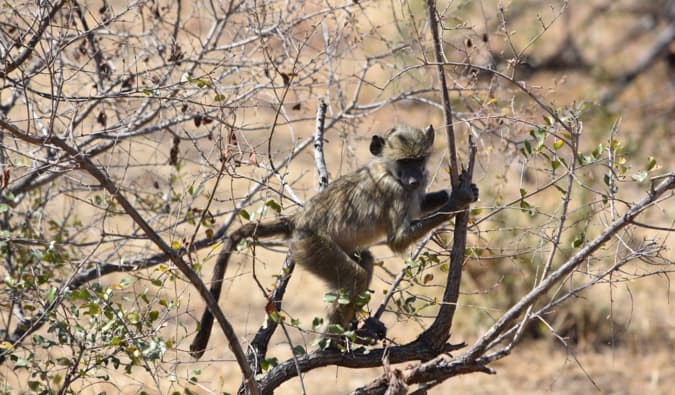 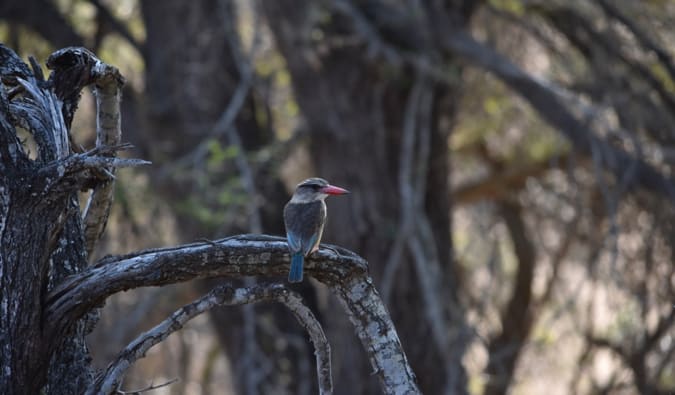 A female grey-headed king fisher! They’re a common bird and very protective of their nest. 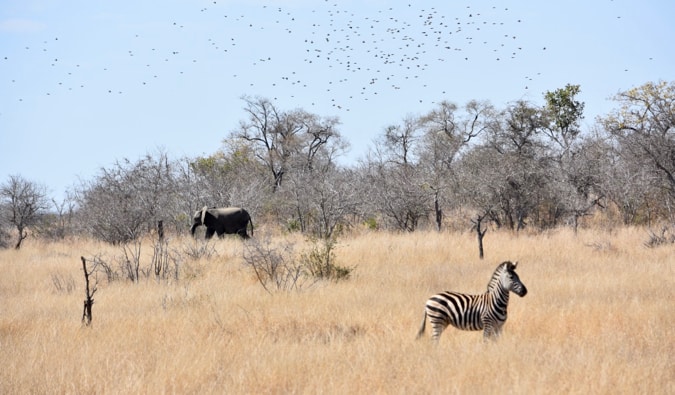 A zebra and elephant each going their own way. In 1920, there were thought to be only 120 elephants left in the country. Thanks to conservation and sustainable tourism, there are now around 10,000. 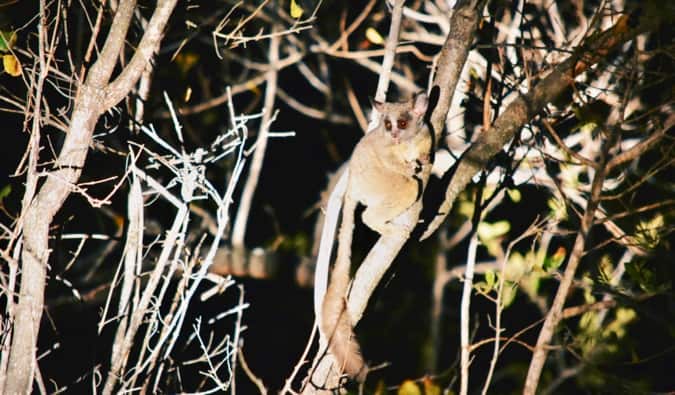 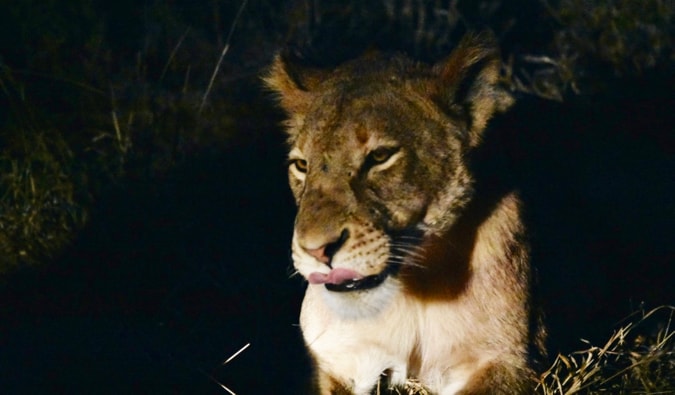 During our night safari, we ended up spotting a lot of lions. I did hate how they shine the light on them though. 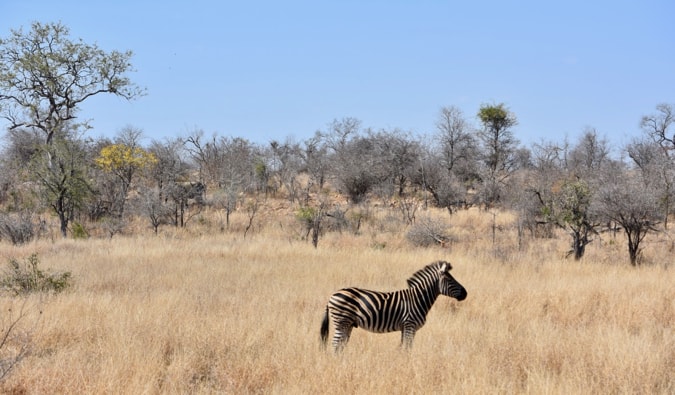 A lonely zebra on the savannah. 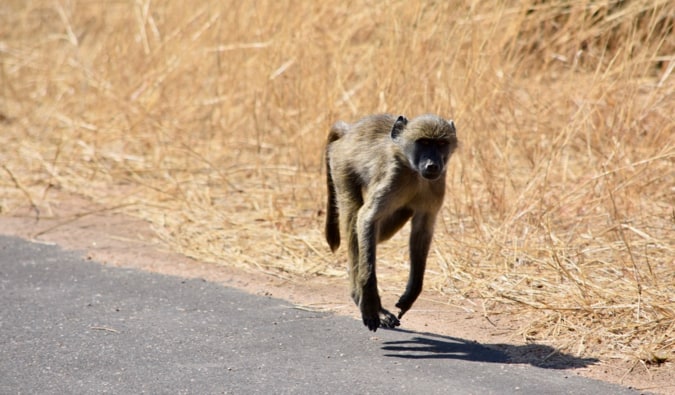 A monkey following us on the road (probably looking for a free ride!). 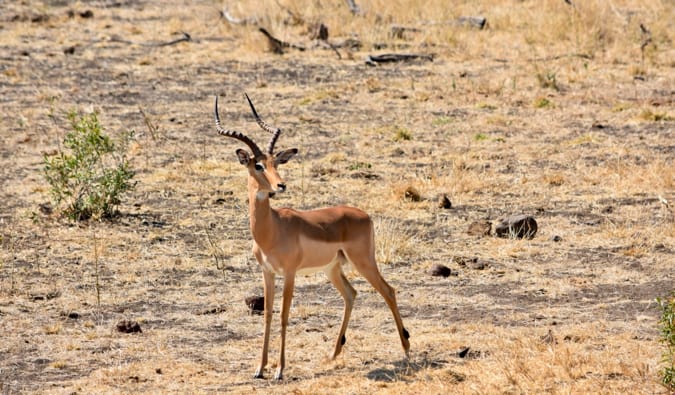 A worried-looking impala (don’t worry it was just our engine that freaked him out). They’re one of the fastest land animals in the world, reaching speeds of up to 90km/hour (55 miles/hour). 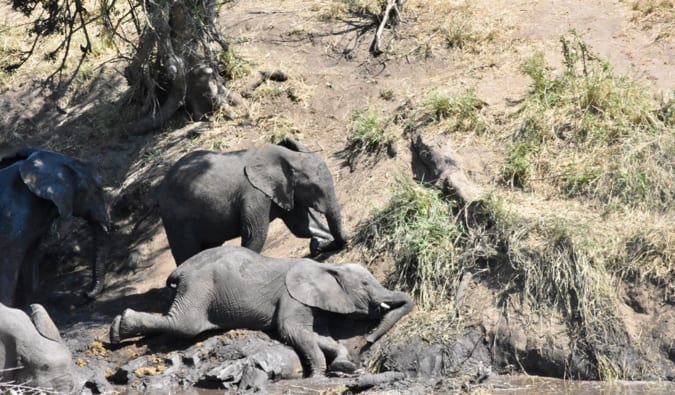 Elephants playing in the mud. We sat there and watched them for about 20 minutes. They looked like they were having some fun! 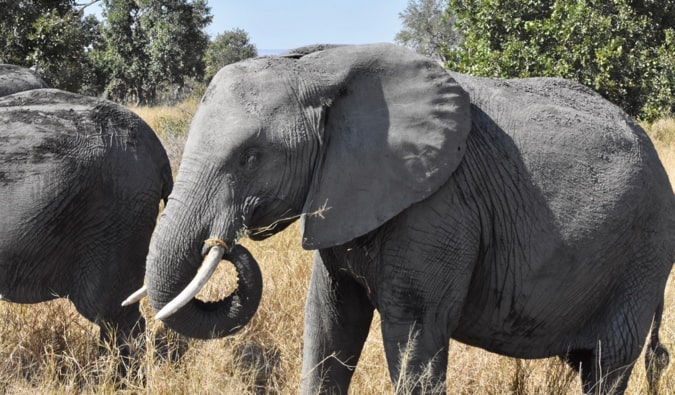 More elephants. You can never have enough. 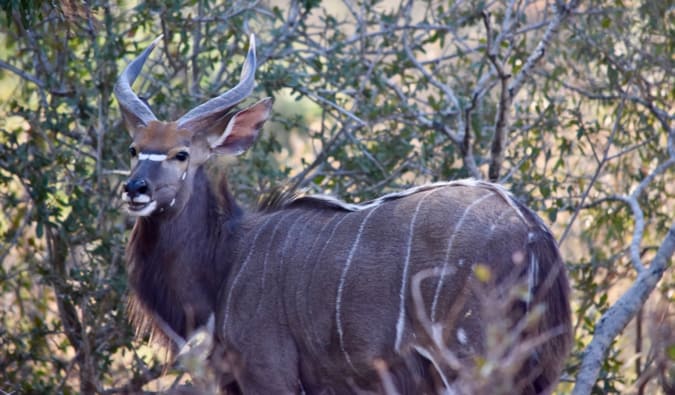 A nyala, a spiral-horned antelope that’s bigger than both impalas and gazelles. 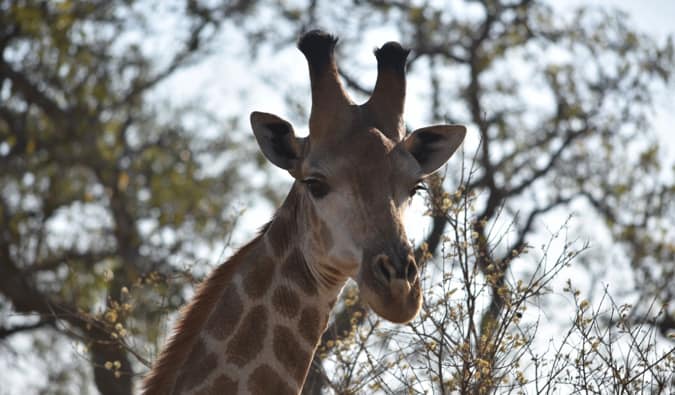 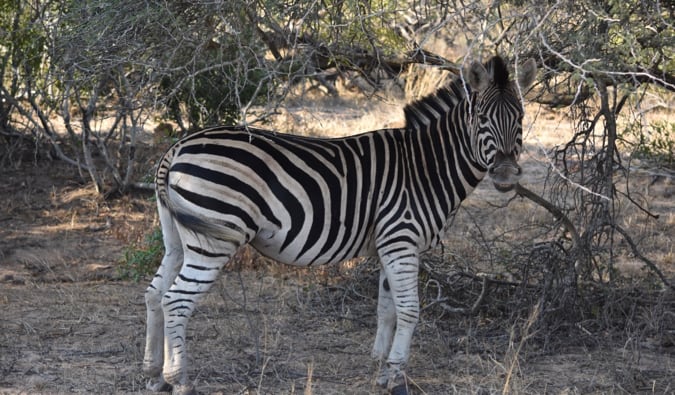 A zebra smiling for the camera! 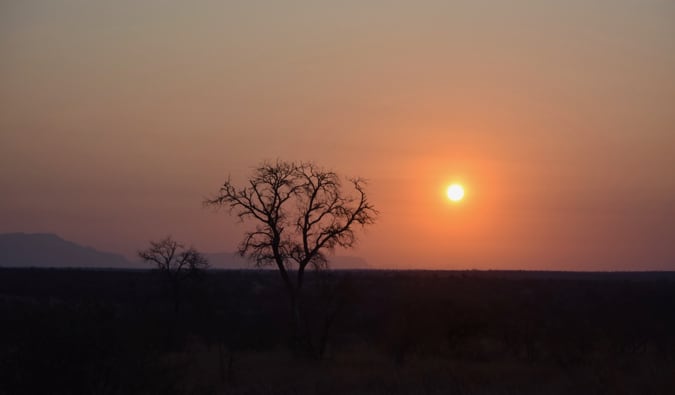 The sunsets (and sunrises) in Kruger are simply stunning. The sun is always this vibrant red. Very powerful. 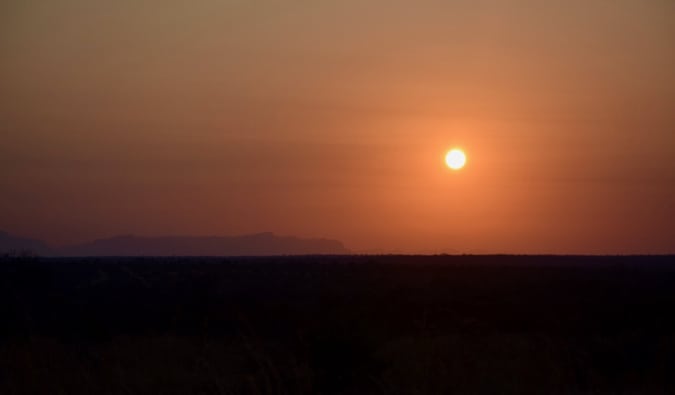 So gorgeous! Here’s another. 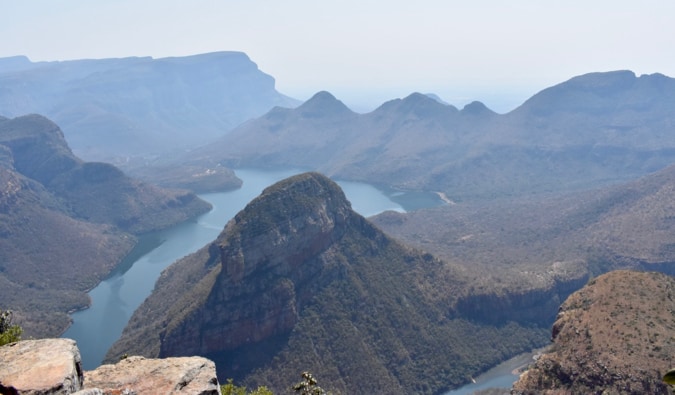 The incredible Blyde River Canyon! It’s one of the largest canyons in the world and generally considered to be the largest “green” canyon (as in a canyon that is lush with flora). It’s the second-largest canyon in Africa. 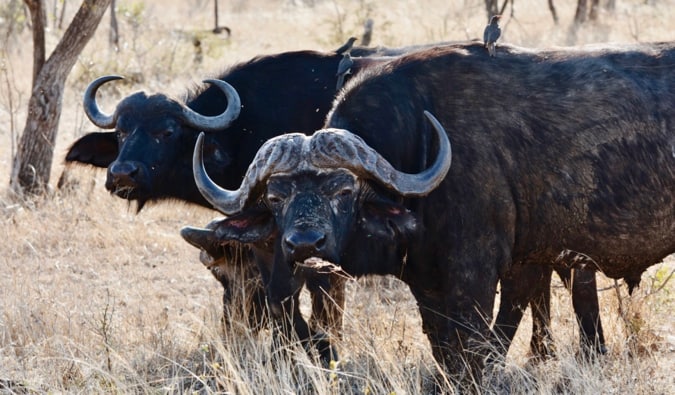 Cape buffalo, one of the Big Five. The others are lion, leopard, rhinoceros, and elephant. The term was coined by big game hunters who considered these 5 to be the hardest animals to hunt on foot. 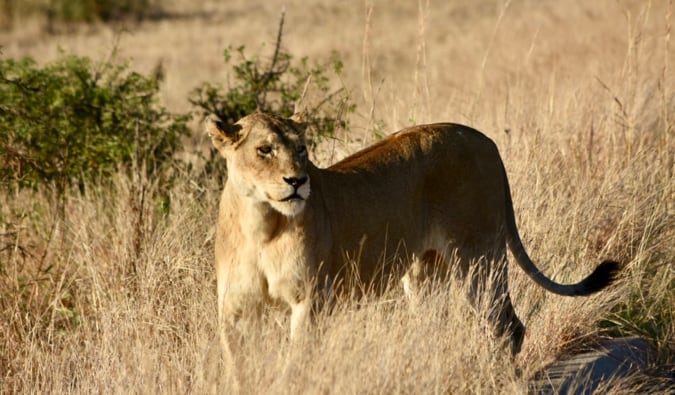 A lioness on the hunt. 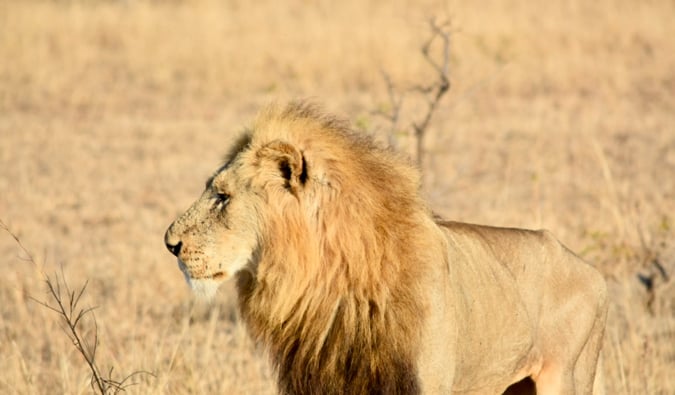 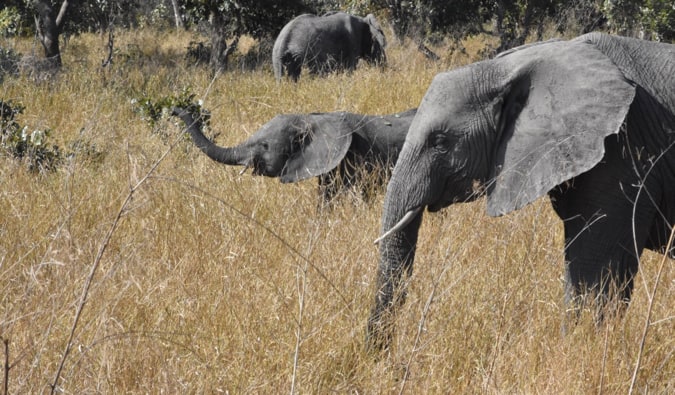 A baby elephant and its family.

Kruger National Park is pretty easy to visit if you have a car (you can just drive there and stay at a lodge), but while I noticed a lot of people self-driving through the park, having a guide to spot animals and explain the ecosystem of the park made the experience much richer (these guys have eagle eyes!).

It was nice to hear some history of the park and learn about the bush, how the animals there interact, and about poaching and how they are combating it, as well as hear opinions on dealing with the influx of tourists. You don’t get that when you go alone.

If you’re going to South Africa, the best time to visit Kruger is the end of the dry season (August–November) because the lack of watering holes means animals have fewer places to congregate around, making them easier to see.

Book Your Trip to Africa: Logistical Tips and Tricks

Note: Intrepid Travel, our partner tour company, covered my trip to Kruger, providing the car, guide, and lodging. Flights to South Africa and food were at my own expense.